Home Arts & Culture MindanaoArt (9 of 10): COLORS OF THE EARTH by Talaandig Soil Painters

Exhibit Title: Colors of the Earth

The Talaandig Artists will reveal the different colors of soil from their ancestral lands through paintings. The art pieces show different images of the tribe of its past and present environment.

Revealing the colors of the soil will enhance appreciation of the mother Earth especially when it can be found in the different forms and images painted by the artist. In these masterpieces, their people’s imaginations, visions, spirituality, reality and cosmology are portrayed.

Viewing the art pieces will open up a consciousness that indeed the earth has many colors and it gains understanding that land spaces are not only for agriculture, mining and buildings but also it is a vehicle of transforming beautiful mind of the Talaandig people.

Waway as he is popularly known is from the Talaandig community of Tulugan – Songco, Lantapan, Bukidnon. He speaks the Talaandig native dialect, Inukit or Binukid and is conversant in Tagalog and English. He is regarded as the mentor of all, having explored soil painting as a tool to unite the tribe back to its roots. Although known best for his soil paintings, he also uses pen and ink.

He began doing art at the age of 24. He started using soil to make bracelets, pendants and other ornaments and then later on, he concocted pigments from soil which they now use to paint.

He transfers the technology of making pigments from soil to members of his tribe.

Now, 50 years old, he says he just loves art. As an artist, he wants to be a legend.

Obviously Waway, is unique in some ways. He is a visual artist and a performance artist. He plays different musical instruments which he personally crafts. He also sings and is very jovial.

Being the youngest daughter of Talaandig chanter Datu Kinulintang and sister of world- renowned performing artist Waway Saway, Salima honors her family’s artistic tradition through painting. Salima tells the story of the Talaandig people on canvas.

During the Singapore Biennale 2013: If the World Changed event, Salima and the Talaandig Artist Group staged an art exhibit entitles Memories of the Peoples of the Earth: The Revolution of the Talaandig People at the gallery of the Singapore Art Museum, the National Museum of Singapore and the Peranakan Museum.

Diminutive in form, RJ can play the guitar with a flair and innate talent, making music as if the six strings of the guitar were 88 keys of the piano.

He jams with the band, but most of all makes his own music that is reminiscent of the sound of nature and rhythm of the tribes.

His music blends well with his art, which he takes up as a tradition of the Talaandig people – soil painting.

Unassuming for all his talents, he just wants to become a good artist just like his father, Waway Saway.

Gerald started creating in art in 2007. He was a flute maker from the Talaandig community. His mentor is artist Waway Saway.

Like his people, he is also a soil painter who sometimes combines his works with other materials.

He wants to promote their culture and tradition as well as help in sustaining abundance and growth in their community, and he believes this can best be done through art.

Also from Tulugan-Sungco, Bukidnon, Balugto lives up to his nickname, the Talaandig word for rainbow, as his talents are a true kaleidoscope of various arts: visual, performance, and music.

Balugto recorded a compact disc, which features his musical talents as a percussionist. As to the visual arts, he has been creating art since 1997,  a practice that includes painting, bead working, crafting clay ornaments, and making the best sounding drums in the community.

Balugto prefers to use natural pigments, and pen and ink in his paintings. Thus, the mountain soil itself provides Balugto with a vast variety of hues for his palette. Part of the process of working toward his dream of becoming a successful, multi-dimensional artist, is sharing his talents, thoughts, vision and ideas with the young artists of Talaandig tribe.

In addition to performing at the opening and award ceremonies for the Second Annual Indigenous Peoples’ Visual Art Exhibition in Davao, Balugto’s piece “The Unseen World” won a prize in the juried competition. The same piece also won an award at the recent regional Philip Morris Arts Competition which qualified Balugto for the national level competition in January 2008.

Raul also hails from Songco, Lantapan Bukidnon and has been into soil painting since 1997.

He gets his inspiration from culture and indigenous knowledge and its intricate relationship with nature and music.

He also wishes to inspire young indigenous peoples to be proud of their culture by promoting traditional music and arts.

He has joined several art exhibits all over the country and garnered awards as Mindanao Regional Awardee for 2015 Philippine Arts Award, and in Kalinawa Art Foundation’s painting competitions.

He has participated in various art exhibitions and conducted soil arts workshops. He prefers themes that tackle culture, social, and environmental issues.

The youngest among this team of artists at 18 years old, Jhonrey is from Quezon, Bukidnon.

He is a newbie to soil painting having been inspired by the works of Waway. He also does bamboo crafts like lampshades and flutes. 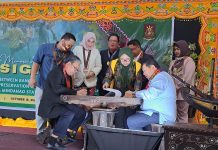 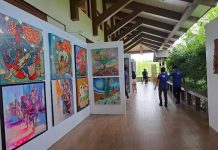