DAVAO CITY (MindaNews/19 August)–An official from the Davao City Investment and Promotions Center (DCIPC) said yesterday that two more companies have expressed interest to develop a residential area that was hit by a fire in April into a mixed-use facility.

Speaking at Monday’s Kapehan sa SM, DCIPC chief Ivan Cortez said the two companies have manifested their intention to join the bidding to develop the area along with a Malaysian firm.

However, Cortez said the city needed to get the full details of the proposals first before it can reveal the identities of the two firms.

Mayor Rodrigo R. Duterte said last week he was meeting with the Malaysian investors soon to discuss the details of the project.

However, Cortez said the Presidential Proclamation of former President Joseph Estrada stands in the way of developing the site since it has been declared a human settlement area.

Cortez, however, clarified that the residents of the area would be included in the development, with proposals for a tenement located in the area among the plans.

“One company is proposing to build a mixed-use development project similar to the Malaysian firm, while the other one is proposing for a bigger scope that would cover Sta. Ana wharf to the property near Times Beach,” Cortez said.

The City Legal Office is now looking at the proposals, he added.

In a related development, Task Force Isla Verde spokesperson Leo Villareal said the task group is close to being disbanded.

Villareal, also a guest at Monday’s Kapehan, said that their roles as a task force are almost complete, citing the delivery of immediate assistance to officially identified fire victims and occupants.

He added that the construction of buffer zones, road networks, drainage systems and circumferential roads are also close to completion.

The Badjao residents who used to be temporarily housed at Magsaysay Park have also been moved elsewhere, Villareal said.

Executive Order 18, issued by Duterte, created the task force to identify the immediate needs of the victims.

VIllareal said the individual concerns of the communities in the area would now be directed to the concerned agencies such as the City Social Services and Development Office, City Health Office and the Davao City Police Office, among others. (MindaNews) 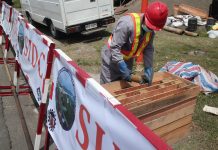