The high-powered firearms surrendered by William's group were “actually only theatrical props” given by the 1001st Brigade-AFP “to bolster the lie peddled during the ‘surrender ceremony’ which was timed to coincide with the Brigade Anniversary,” Makatindog said.

Makatindog said brothers William and Jimmy are engaged in banditry, extortion, harassment and other criminal activities. William, he added, was behind the December 5, 2006 massacre in Brgy. Halapitan, Lapaz which resulted in the killing of a Lumad family of four.

Holganza was still unavailable for comment as of  7 p.m. August 25.

Major Medel Aguilar, chief of the Civil Relations Group, told MindaNews “I trust William and not the NPAs.”

“I was listening to the interview of William….last night over DXGM and I could say that William knows too much about the communist organization both in the underground and the aboveground. He can tell the stories in detail and many of his information are very explosive especially on the strategy that the CPP/NPA/NDF is employing to suppress the indigenous peoples’ assertion of their rights over their ancestral domain,” Aguilar said.

“William’s revelations are very damaging to the CPP/NPA/NDF that drive them to do  everything to destroy his credibility,” he said.

Makatindog said the MMDF is “no different from the Alamara, Alimaong, Tribal Force and other Lumad paramilitary groups.” 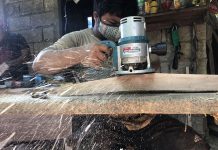