The legislators, who were accused of delaying the passage of the ordinance banning aerial spraying in plantations, lambasted the groups for insulting them.

The four councilors denied they have vested interests in the aerial spraying issue and said they were only batting for proper deliberation of an important legislation.

IDIS linked Dayanghirang to Marsman, an agricultural company that is into banana production. They also pointed out that Abellera owns a 15-hectare land leased by another banana company.

IDIS reported that residents near banana plantations were disappointed with the four councilors.

Dayanghirang said Tuesday that the award was an “overkill.” He said MAAS and IDIS  stepped on the rights of the people for insulting the officials they elected.

MAAS' Dagohoy Magaway threatened to campaign against the councilors in the 2007 elections.

Councilor Victorio Advincula belittled the threat saying they have done nothing wrong. . He said they only observe the democratic process in deliberating the proposed aerial spray ban.

Mahipus branded the group "self-righteous" and "self-anointed" environmentalists. Abellera said that the award given to him undermined his acts and values. He said the groups have underestimated his capacity to perform his job as a legislator.

Abellera, who said he was neither angry nor elated, explained he only wanted to give all stakeholders a chance to be heard on the issue.

Councilor Nenita Orcullo, whose proposed regulating guidelines for aerial spraying in 2004 became the forerunner of the banning ordinance, sympathized with the four councilors. She said the pro-ban groups did wrong in giving out the awards as it undermined instead the gains of their advocacy.

Councilor Leo Avila III, main proponent of the ban ordinance did not defend the "award-giving" groups. Instead, he urged groups, including MAAS and IDIS not to drag vegetables into things with negative connotations. He said it added to the low regard of Filipinos for vegetables.

Avila denied that he was justifying the award when asked by Councilor Bonifacio Militar about his speech.

The city council did not vote on the proposed ordinance Tuesday following the 10-day request by Mayor Rodrigo Duterte for the City Planning and Development Office to probe on the effects of aerial spraying to people and the environment. Duterte announced Sunday he would search for "hard facts"on allegations that the practice is hazardous. 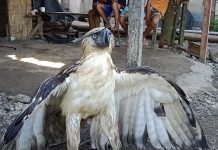 Davao to get COVID-19 vaccines from Johnson & Johnson

Next AFP chief of staff is recipient of highest military award