CLAVER, Surigao del Norte (MindaNews/29 March) — Mining companies operating along Claver Bay have until next year to clean the coastlines and the “chocolate river” of Hayanggabon, the House committee on natural resources declared. “Will you guarantee that after what these (companies) are doing now the water will be clear? Answer me with a yes or no!” Pichay boomed at Olavides.

“Yes, Sir,” replied Olavides, who was repeatedly cut short by the congressman while trying to explain what EMB, Mines and Geosciences Bureau and the mining companies are presently doing to address the massive siltation in the bay.

On Friday, a day after Congress went into recess, the committee concluded a two-day hearing on mining issues in Surigao del Norte that started in Butuan City Thursday in response to “complaints from the public on massive siltation, fishkill, destruction of swamps and coral reefs and other abuses caused by mining,” Ako Bikol Partylist Rep. Rodel Batocabe said at the start of the hearing.

“We’re here because we want to verify reports by various media organizations, and to know what the LGUs (local government units) are doing, and what mining has done,” he added.

Batocabe authored House Resolutions 1193 and 2124 to probe into the reported massive siltation in the coastal waters of Claver.

View claver in a larger map

Pichay, who hails from Cantilan town which is known for its strong anti-mining sentiment, scored mining companies for reportedly turning Hayanggabon River into a “chocolate river.”

“We now have a new tourism destination in our midst. While in Bohol they have the Chocolate Hills, here in Surigao we have the ‘Chocolate River’,” he told hundreds of pro-mining participants at the Claver Gym.

The lawmaker said he will take a bath in Hayanggabon River and drink water from it once Olavides and the mining firms have cleaned it up.

Olavides said that in February this year the EMB and MGB central offices held a technical conference together with the mining companies concerned.

The conference was in response to a Department of Environment and Natural Resources (DENR) memorandum requiring the four mining companies to explain in seven days the massive siltation in Claver Bay and Hayanggamon River.

In the said conference, the companies signed a “commitment” to remove heavy silt from Claver Bay and Hayanggabon River starting February this year until next year.

Olavides said the firms have been doing dredging activities immediately after the conference.

TMC resident mine manager Engr. Jose B. Anievas explained how they prevent siltation by conducting mining operations during the dry season.

But Batocabe told Anievas to go straight to the activities that the company has undertaken to address the problem.

Anievas tried to finish his explanation but Pichay butted in and expressed his “big disappointment” at the mining companies.

“There are four of you large-scale mining companies operating here who have a notice of violation. And I always defend you, but it is a very big disappointment because you have a siltation problem here,” Pichay said.

“Hindi ako naniniwala na kaya may (I don’t believe that there’s) siltation because of rain. It is always raining here. I won’t buy that justification,” the congressman said, adding there was no siltation in Tubay town in Agusan del Norte where SR Metals Inc. operates.

“We made an ocular inspection there yesterday (Thursday) and we didn’t find anything but here in Surigao it is (a) chocolate river,” he said.

Pichay said SR Metals has only been for more or less five years but has been able to control silt from going to the seas and rivers, while Taganito Mining which has been operating for the last 25 years has not addressed the problem. 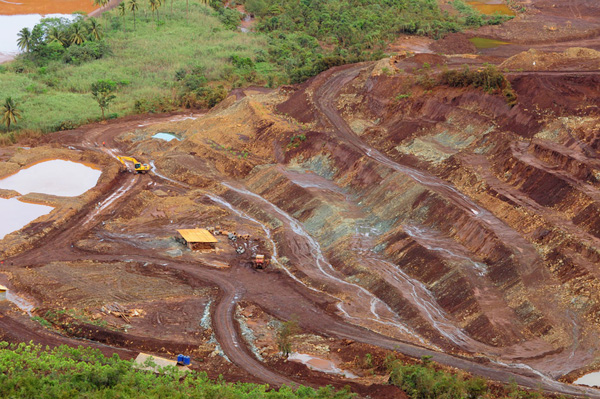 Anievas told reporters after the hearing the companies were undertaking a “holistic approach” to address the siltation problem in the coastlines of Claver. It means the companies will implement their respective measures as well as work with each other in avoiding wastes from going downstream.

Dredging activities have been undertaken at the Hayanggabon River by Taganito HPAL and in Urbiztondo River by AMRI. TMC is constructing seven catch basins for the run-off from all its ridges.

Anievas also explained the brownish discoloration in the bay “is not necessarily” siltation based on “certain standards to be followed.”

Siltation occurs if 90 ml per liter of waste is found in the water, he said

Asked why Taganito is only acting on this issue now, Anievas said “it is a matter of enforcement by government agencies.”

He said no one paid much attention several years ago when the industry was on a decline unlike now that the prices of minerals have gone up.

“I hope they can understand that what we’re trying to say here is that the water really turns turbid when it rains,” he said, referring to his earlier explanation that was cut short.

He added the activities undertaken by the mining companies now should not be misconstrued as temporary saying “this is a continuing activity.”

At the sidelines of the hearing attended by hundreds of mining supporters, several Mamanwas and some clerics from the United Church of Christ in the Philippines (UCCP) and the Iglesia Filipina Independiente (IFI) held a prayer protest 200 meters from the municipal gym.

Fr. Richie Navarro of IFI said those who were invited at the hearing were mostly “pro-mining” while those who are directly affected by the mining operations were not invited “especially the Mamanwas’ who despite receiving the 1% royalty are still suffering from indignity and still the poorest of the poor of our brethren.”

“Police and some military personnel blocked us from coming near the venue even if we were not creating a noise. We went there so we can pray,” Fr. Navarro said.

UCCP Pastor Juvy Cabillo said the companies could not claim they are doing “responsible mining” since it has not benefited the majority of the people in the province and even the whole region.

Claver remains one of the poorest municipalities in the province based on government figures. Surigao del Norte ranks as the poorest province in the region.

The Mamanwas said they joined the prayer rally because they realized that mining did not help alleviate their economic conditions but they have instead experienced military operations.

Datu Geni Calingasan of Sitio Bungogon in Gigaquit, Surigao del Norte appealed to the President to help them saying the military operations have made it difficult for them to go back to their homes.

Calingasan said the royalty they received from mining companies has not improved their lives but only divided their tribe.

Joan Hukman, tribal chieftain of Sitio Palilihan, Barangay Mahanob, also in Gigaquit, said: “The royalty we received (in the past) was only a penny compared to what we are suffering now. We are still poor.” (Vanessa Almeda/MindaNews)