Cotabato Archbishop Orlando B. Quevedo, former president of the Catholic Bishops Conference of the Philippines, Bishop Dinualdo D. Gutierrez of the Diocese of Marbel, Bishop Guillermo Afable of the Diocese of Digos and Bishop Romulo dela Cruz of the Diocese of Kidapawan have petitioned the Sangguniang Panlalawigan of South Cotabato to refrain from amending the open pit mining ban contained in its environment code.

The ban on open-pit mining was seen as an obstacle to the plans of Sagittarius Mines, Inc. to commercially develop the Tampakan project, which has an estimated capital requirement of $5.9 billion.

In June 2010, then governor and now Second District Rep. Daisy Avance Fuentes approved the environment code that bans open pit mining in the province. Pro-mining groups eventually asked the SP to reconsider the ban on open pit mining so that Sagittarius Mines could proceed without a hitch.

The bishops recently filed their petition to the SP with the attached signatures of about 30,000 residents from the four dioceses to maintain the prohibition on open-pit mining.

“We are determined to protect and promote the integrity of God’s creation by not allowing the senseless destruction of 1,087 flora and 289 fauna many of which are endemic to Mindanao,” the bishops said in the resolution.

“The 4,293.01 hectares of irrigated farmlands of the 1,873 rice farmers with an average of 17,172 tons or rice per cropping are greatly dependent on the water supply originating from the Quezon mountain range to which the Tampakan watershed belongs and such mining operations will directly affect and threaten food security,” they added.

The bishops also claimed that the operation of Sagittarius Mines has already caused violent incidents and violation of human rights, especially the right to worship and self-determination of the indigenous peoples.

They were apparently referring to the successful attacks of the communist New People’s Army rebels since 2008 on the base camp of Sagittarius Mines in Tampakan and the subsequent raid on the municipal police station. 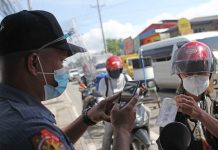 7.1 quake jolts residents in parts of Mindanao; no damage reported