DATU ODIN SINSUAT, Maguindanao (MindaNews/11 August) – Around 1,000 individuals joined the tree planting activity as part of the commemoration of the International Day of the World’s Indigenous Peoples on Saturday.

He said that aside from coinciding with the International Day of the World’s Indigenous Peoples, the activity included a foot march which is part of basic soldier’s course, and enhanced the source of drinking water.

He said it felt good that many people joined the tree planting.

“Trees are essential to forests, the forest that protect us from landslides. Floods, climate change and other disasters, without forest we are nothing,” said Aveen Gulo, project manager of Indigenous Peoples Development Program, one of the participating groups.

The International Day of the World’s Indigenous Peoples is observed on August 9 each year to promote and protect the rights of the world’s indigenous population.

This event also recognizes the achievements and contributions of indigenous people such issues as environmental protection.

It was first declared by the General Assembly of the United Nations in December 1994, marking the day of the first meeting of the UN Working Group on Indigenous Populations of the Subcommission on the Promotion and Protection of Human Rights, in 1982. (Ferdinandh B. Cabrera/MindaNews) 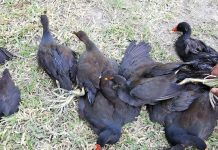