Saban, 62, has been making machetes this way since he was 13 when his father, Procopio, taught him the art.

“This is the only skill that I have ever learned in my life. I started as a young apprentice to my father,” he said in the vernacular.

Saban does not mind his is a lost art. His small foundry produces some 200 machetes a week. Modern foundries—using machines for molding and aluminum kilns—are capable of producing thousands of machetes and knives a week.

He said his brother, together with some Japanese businessmen, invested in modern machete-making machines but gave up after only two years of operation.

Saban said the machine bought by his brother and Japanese partners was ill-suited for the local materials for machete blades, which are old car leaf bars.

“I find that blades forged by machines have uneven surfaces. I find it hard to hammer them,” Saban said.

Five craftsmen work at Saban’s foundry. They forge red, hot pieces of car leaf bars from the kiln; repeatedly hammer the bars to flatten them into shape; and grind them to sharpen the blade.

Nestor de los Santos sees to it that the surface of the blade is evenly flattened. If he is not satisfied,  he would put the iron bar back into the furnace, bring out the red hot bars and together with another craftsman, hammer the blade into shape.

This laborious process is repeated until the blade takes its final shape.

When they are satisfied with the blades, the craftsmen turn them to Joel Manalayao, 21, who carves the handles for the machete from mahogany.

The newly-finished machetes are then displayed outside Saban’s foundry. Customers from as far as Bukidnon and Compostela Valley come to buy the machetes.

Like his father, Saban said farmers are his best customers for machetes..

“I remember that my father used to bring me to Bohol where farmers eagerly waited for us,” he said.

Saban said his father had a foundry in Cebu City before he decided to resettle his family in Barangay Maa, Davao City in 1962.

He said as soon as they settled here in Davao City, their family immediately began making machete blades for logging companies and farmers who were opening new lands in Mindanao.

Saban said their family prospered and was able to buy the lot where their father’s foundry was built. His father also taught Saban’s four brothers and sister how to make machetes.

Saban’s only regret in life is that none of his four children has learned the art handed down by his father.

“My children do not want to learn. They find the work hard. They prefer modern things,” he said. Out of the Box:  Homeschooling in the 1980s when it was looked upon with scorn and skepticism 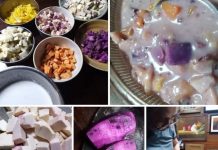