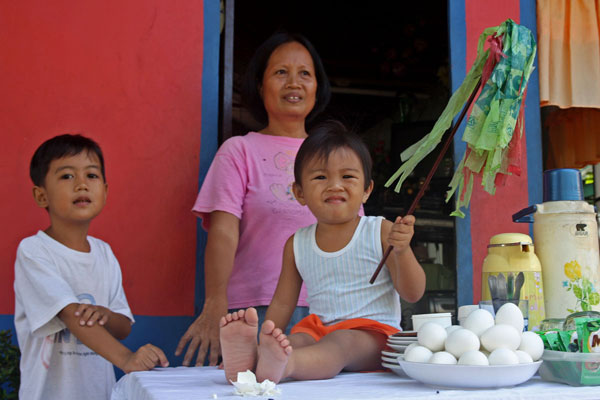 ILIGAN CITY (MindaNews/01 June) — For the average teenager, life revolves around Facebook, parties, and relationships.  The biggest problem he’s faced might have been about winning over that girl in Psychology class, or perhaps about convincing his parents to give him an extra P500. He might have stepped out of Jollibee, stomach full, arms heavy with pasalubong, to be swarmed by street kids reaching for his food. He might have whisked them away, knowing but not caring that the last thing they’d eaten was the leftover chicken they dug out of a trash can a night ago.

I was like that for the longest time. With the safety and comfort I had been enjoying at home with my family all my eighteen years, it seemed irrelevant that a huge chunk of the population has never known—and might never know—what it’s like to sleep on a soft bed in an air-conditioned room. Which is why when Mama suggested last month that my Ate Kara and I volunteer at Gawad Kalinga, I was given, as the cliché goes, a huge eye-opener.

We paid our first visit to GK Missionville in Canaway late in April. Like all GK sites, it was a village sprinkled with colorful, uniformly-sized houses. At the GK Office, which stood beside the basketball court at the heart of the site, we were introduced to some of GK’s fulltime workers: Tito Judy, Tito Keith, Tito Jun, Ate Ingrid, and Tito Arnel. They gave us a brief orientation: the people who lived in GK Missionville were actually victims of the fire in Saray in 2002, and GK was getting ready for the Summer Olympics its Child and Youth Development (CYD) Program was holding on May 21. This was the “warm-up” for the much bigger event Iligan will be hosting next year: the annual Bayani Challenge, which aims to unite the various peoples of the Philippines through a series of team-building activities, including constructing hundreds of houses in the numerous GK sites.

Ate Kara and I chaired the Publicity Committee. And so the next few weeks were a blur of movement and meetings; we recruited Ate Kara’s friends Dahl and Jade and sent letters to radio stations, wrote a press release that we sent to the Iligan website and circulated on Facebook, and stocked up on GK-related knowledge. We learned that, despite being a volunteer-driven organization, GK had already transformed the lives of thousands of families all over the world. Those who used to live in the streets could now sleep under a roof. In their past lives the word “tomorrow” meant struggling to survive; thanks to GK, “tomorrow” became something to look forward to, because it now meant another day to share their blessings with friends.

It was during those weeks that we met and bonded with the other GK volunteers, some of whom are now our good friends: the warm, cheerful Katrina Battad, the energetic Earl Yano, and the friendly Loraine Padayao.

When the committees had sorted everything out and we had contacted all our sponsors, all that was left to do was set up the stage and get on with the show.

The Olympics kicked off with a motorcade starting from Pryce Tubod early in the morning on May 21, 2011. Over a dozen imaginatively-decorated cars, carrying residents of 11 GK sites in Lanao del Norte, wove around the streets of Iligan City and drove to GK Missionville. From there, the few hundred participants spilled out of their vehicles and filled the multipurpose hall. And finally, after Mass and a torch-passing ceremony, the day exploded into several sports, cultural, and literary events that the children and youth of GK happily participated in.

It was an extremely busy day. Everyone seemed to be occupied in one way or another: many of the GK houses sold food and water; the participants, if not competing, were rehearsing for this or that; the City Mayor’s Office, Red Cross, and other organizations gave feeding programs, services, and pamphlets; the CYD committees were frantically making sure everyone was doing his job.

I and the other guys from The Umbrella, Iligan’s Joint Photographers Society, on the other hand, roamed around Missionville to capture the priceless looks of joy on everyone’s faces. It occurred to me that, since these people lived in GK Sites, they must have gone through the same emotional trauma as the Missionville residents. How, then, did they, in spite of everything they’ve been through, still manage to be happy, to smile so enthusiastically and say, “Picturi mi, ‘col! (Take a picture of us, Uncle!)” when I did something as simple as pointing my camera at them? I inwardly cursed myself for whining about my own problems that seemed so insignificant when compared to theirs. They shamed me in their pursuit of happiness, in their ability to fix their gaze on fortune rather than misfortune.

Kent Bulingkit, the 16-year-old head of GK Missionville’s SIGA (Youth) Program, told me, “We moved here after the fire in Saray destroyed our homes nine years ago. We are happy when we celebrate the anniversary of that day, not sad.”

The CYD Olympics was sponsored by Dunkin’ Donuts, Zammi, Pioneer Insurance, Applebee Water Refilling Station, Aruma Café, A&M Printing Press, St. Michael’s College, GLC Construction, and Iligan’s City Government. We would like to thank all of them for helping us ensure the success of the event.

And of course, a huge “thank you!” to our GK Head, tito Jake Gerona, without whom none of this would have been possible.

A few days ago we at GK Iligan attended the Mindanao GK Leaders Conference in Bukidnon. There we learned about GK’s plans for the next seven years and heard moving stories from GK workers and residents alike. We saw how GK not only gave help to the needy, but also taught them to help others when they are ready. The GK Way is an endless line of selfless service.

“What we do in life echoes in eternity,” as the famous line from Ridley Scott’s Gladiator goes. After working with GK for only a few weeks, I have come to realize that even the small things we do to help others are a crucial link that could make a big difference and have the power to change the future. After all, what is eternity but an unending sequence of futures?  (Roberto Klemente R. Timonera will be a sophomore creative writing student at Silliman University in Dumaguete City. He was a fellow at the Iligan National Writers Workshop in 2010)