Secretary General of the Lao Securities Commission Mrs Vathana Dalaloy recalls memories of the first eight years of her life, when she and her family lived in the caves with Lao revolutionaries.

Northern provinces, Laos — “It was night time. My brother and I were left in the cave while our parents had a meeting. Mother told us to fold the laundered clothes while they were away. My brother was folding the clothes while I messed them up… Our light was only one candle. Suddenly, we heard an aircraft. I didn’t understand what’s going on but my brother did. He blew out the candle immediately. And, we hugged each other.”

That is the only memory as a two-year old that Ms Vathana Dalaloy, now the Secretary General of the Lao Securities Commission, remembers while she and her family were living inside Hanglong cave in Viengxay district, Houaphanh province. Her elder brother who now works for the Department of Information and Technology, Ministry of Post and Telecommunication, was five years old at the time.

But, as an innocent child during wartime, most of Ms Vathana Dalaloy’s memories reflect a wonderful childhood.

In 1968 a baby girl, weighing barely three kilograms, was born inside a cave which is now a museum called Small Hospital (Hong Mo Noi) located next to Mr Phoumi Vongvichid’s cave. During this time, the Pathet Lao with its communist supporters was gradually advancing in the northern part of Laos and defeating the Royalist Lao Government troops alongside the American and South Vietnamese air forces.

A surgeon, her father, who was a former Minister of Health, was the only one who assisted her mother in her delivery. “My father told me that I came out with pale and dry skin,” says Ms Vathana. “My mother did not have enough nutrition.”

Her parents had joined the revolution while they were studying in France. After graduation, they came back to Laos and provided medical services in the hospital caves. When Ms Vathana was five months old, they transferred from Small Hospital to Hanglong cave in Viengxay.

It was in this cave where she first experienced Christmas. Despite her family not being Christian, her parents tried to mentally stimulate their children with all kinds of folk stories and cultures. “My mother told us to behave well so that Santa Claus would give us chocolates. I didn’t know what chocolate was then,” she says with a smile.

One night, she and her brother went to bed early, leaving their shoes open as they were told that Santa would slide the chocolates inside while they were asleep. Certainly the next morning, their shoes were filled with small pieces of chocolate, which their aunt who was working for the department of foreign affairs received from foreign friends and gave to their mother.

A group of Lao artists once visited the village to perform circus acts in the middle of a nearby empty rice field, she says. She broke an arm as she and her brother mimicked some stunts they saw from the circus in the cave. Ms Vathana has more memories at the Lao-Vietnam Friendship Hospital Caves, where her family moved when she was four. This site is seven kilometres from the cave where she was born.

Ms Vathana participated in a caravan led by government officials last January 8-13. The journey was designed to promote tourism destinations in northern provinces, and the group visited caves in Viengxay, but not the caves she once lived in. The caravan also commemorated the 65th anniversary of the founding of the Lao People’s Army.

During the cave visit, Ms Vathana separated from the group and went to the Lao-Vietnam Friendship Hospital Caves. They were still under restoration for tourism and the Xieng Louang village authorities are still waiting for funding, she tells Vientiane Times.

Sheltered by the huge karst hill, three caves were built by the revolutionaries during the war to house hospital beds and equipment. In the same hill, a small cave was made for a kitchen. But, since there was no more bombardment at the time, the kitchen was located outside the caves. And, the supposed kitchen was where Ms Vathana and her family lived, while other hospital staff stayed in the village.

At the time, food was scarce; and, there was no market and storage for food. Thus, most people, especially foreign medical specialists including those from Vietnam and Cuba, used gasoline tanks to store freshwater fish and rice field crabs, she says.

One day, her elder brother caught two of the crabs from the tank because Ms Vathana wanted to taste one. “I never had crabs before that,” she recalls. Her mother cooked them for the two kids. “That’s why I remember because I had problems with my stomach after eating them and found out that I’m allergic to crabs,” Ms Vathana laughs.

Her brother was her best friend as they were the only children staying in the hospital caves, although they played with village children sometimes. The pair would run through the corridors or take a peek into the hospital’s maternity ward where their mother worked. For a place without toys, a medicine box was most attractive to curious children like these two. They would crawl under the table of the person who administered medicines to sneak into the storage room and steal medicines with colorful prints on their boxes.

However, the precious memory of her and her brother came to end when they needed to be separated. According to the central policy and for safety reasons, children of revolutionary staff were sent to study in a Lao school located in China, she says. Her brother was among those children to be sent to China when he was eight, while her eldest brother had already been studying in China since the age of six while they were still in Hanglong cave.

“When my second brother left me, it was very bad again,” she says, as tears well in her eyes. “On that day, they gathered all the children who were going to China to get into a bus. On the night before their departure, they stayed in their aunt’s cave near the department of foreign affairs. They both slept together in their aunt’s bed that night.

“I remember her bed was very nice with clean sheet and mosquito net. My brother got up early the next day and dressed up. I knew what was going on but I pretended to be asleep. Then, he kissed me and said: ‘I’m leaving. You’ll be here. You’ll be good,’” her voice cracked. “‘You should listen to mommy. I won’t be here for you.’ I only listened to him with my eyes closed. When he left, I ran out of the cave and watched him getting on the bus. ”

As the US pulled out its forces from Indochina, the Pathet Lao was accepted by the national government in 1975. The Lao People’s Democratic Republic was proclaimed and the capital was established in Vientiane. In 1976, together with her mother, Ms Vathana, who was about eight, moved to Vientiane.

Being able to study first grade in elementary school at Viengxay, she continued her schooling in the capital. After graduating from high school in 1985, she studied Cybernetic Economics in Moscow, Russia until 1991. Back in Laos, she worked with Banque Pour Le Commerce Exterieur du Laos for two years, then with the Central Bank of the Lao PDR in 1994. She was awarded scholarships for further studies from the International Monetary Fund from 1995-1996 and a Fullbright in 1998, studying International Economy and Finance.

Ms Vathana worked with the International Financial Corporation in Washington DC in the US from 2000 to 2004. She said her house there was less than a mile from the Pentagon when it was attacked on September 11, 2001.

Following her stint in the US, she has been involved in preparing all conditions for the stock exchange in Laos since 2008. She was promoted to her current position in 2011.

While her father was working for the Ministry of Health, her mother was assigned with the Youth Union and followed her father when he was the Lao ambassador to Cuba and China.

“What I got from that childhood was love as I grew up in a loving family,” Ms Vathana said. She recalls that her father told her stories every night when they were still in Hanglong cave. “We didn’t have TV, cartoons, books, toys… But I learned different stories, both Lao and international.”

Bravery was one thing she learned from her life in the caves. In fact, when later she found herself in hard situations such as during the collapse of the former Soviet Union, she managed by herself well. She did not require counseling after the September 11 attacks in Washington DC.

All her experiences and historical events in Laos helped her understand her country. “That’s why I’ve been doing a lot for my country, for my people and want to contribute more. If I can choose to live my childhood again, I think mine was okay. I love to be there again… It was so exciting and full of love.”

Lorie Ann Cascaro of MindaNews is a fellow of FK Norway (Fredskorpset) exchange programme. She’s currently in Laos and hosted by Vientiane Times. 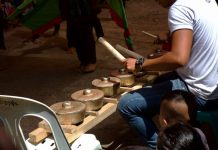 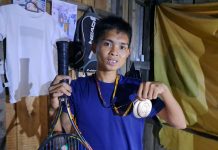