Home Mindaviews THE WORM’S EYEVIEW: Why chairman or punong barangay and not “kapitan”

CAGAYAN DE ORO CITY (MindaNews/19 October) — This point is so widely misunderstood and misused that it needs to be clarified time and again until our society becomes truly democratic and egalitarian—and our system of government compliant with the law.

The term “chairman” or “punong barangay” is prescribed by law for important reasons; not for whimsical or trivial reasons. Thus, we, especially our officials, cannot just take liberties with it or belittle its importance, if only for the sake of accuracy.

First of all, punong barangay is the proper title for the headman of a Filipino community—especially for an official whose primary role is to preside over citizens of equal standing. Its English equivalent is chairman—meaning, one who manages or chairs a group or a gathering.

To chair or to preside is basically the task of a facilitator—someone who manages social interaction or public exchanges that are involved in bringing about cooperation, collaboration, or collective action.

Secondly, a chairman presides over people with more or less equal status and are entitled to dignity and respect as befit sovereign citizens of a democratic community. He does so as primus inter pares, or first among equals—not higher or lower in rank. However, as an elected official, he is a public servant, a role subordinate to his constituents who, as PNoy puts it, are his Boss.

*****
On the other hand, kapitan is a military term, referring to a leader or commander of soldiers and troops—operatives subordinate to him in rank and who are duty-bound to heed his command, obey his orders, or execute his instructions.

A kapitan is answerable to his superiors—accountable to the chain of command all the way to the commander-in-chief—but not to his troops and subordinates. His word is law to them; he doesn’t even have to entertain their questions or ascertain their wishes, much less obey them or kowtow to their desires.

As commander, a kapitan can be said to be the master of his troops and subordinates. But a chairman, the presider of his constituents’ meetings and implementer of their resolutions and policies, is their public servant. He is answerable to his constituents—who are his peers or fellow citizens. In other words, he is their hired hand, steward, or trustee.

Clearly, a barangay is not a military camp, its citizens are not soldiers or troops who need to be commanded by any military official, let alone a mere captain. Thus “kapitan” is not an appropriate title for the head of a community of peers; presiding is the essential role of such an official—not commanding or ordering people around. A kapitan is out of place there.

*****
Before, it was appropriate to use military titles like Capitan del Barrio or Teniente del Barrio because our communities were under military authorities or the Guardia Civil. But that was long ago, during the Spanish regime when authorities could even order Filipinos to pay tribute or work for free building roads, bridges, or other infrastructure.

Today we are a democracy, a republic that derives its power and authority from us, the people. For our basic community to be commanded by a kapitan would be ridiculous.

Besides, the state policy of autonomy for local jurisdictions has ordained that we exercise self-governance under a unique form of government, one which gives us the power to initiate ordinances as well as discipline our officials.

This unique form of government is the parliamentary system—in which the three branches of government are blended and headed by one and the same official: the Punong Barangay. This system sets local governance apart from the presidential system which applies to the higher levels, municipal to national. The term “Chairman” corresponds to prime minister, title of the head of a parliamentary government.

But as a parliamentary government, the barangay headman’s title corresponds to that of prime minister—who like him does so as first among equals. Like a prime minister, he also is subject to Recall or removal by his peers on a question of confidence. His peers are his constituents, the barangay’s inhabitants.

But practically everyone keeps using kapitan and rarely the correct title of chairman or punong barangay, confusing the people. The media also do and so the people are conditioned to use it, effectively propagating the impropriety.

This terminological confusion favors the trapos. Elected as chairmen, they call themselves captain and behave accordingly—strutting about like General George Patton dominating people patronizingly.

Needless to say, this loose practice should be rectified. It justifies the de facto take-over of our barangays by self-appointed captains; which explains why so many of them carry on with the corrupt habits of the Guardia Civil or the Marcos Dictatorship! 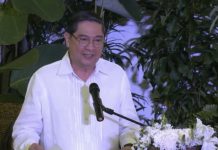