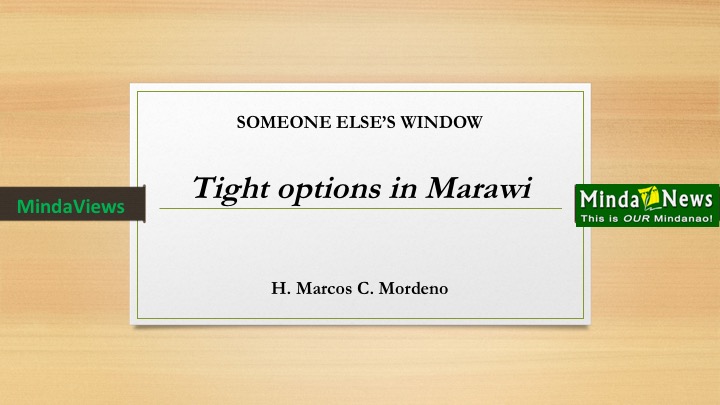 MALAYBALAY CITY (MindaNews/04 June) — From where we stayed inside the provincial capitol in Marawi City, one could hear the sounds of rockets fired from choppers and howitzers landing at the downtown area. Every now and then, Huey gunships would hover less than 200 meters above us. “They’re sending supplies to the troops,” an Army soldier beside me replied when I asked if those choppers joined in the aerial bombardment.

It was 31 May 2017 when our news team entered Marawi,  Day 9 since sporadic clashes erupted between government forces and members of the so-called Maute Group in the capital of Lanao del Sur. On TV, statements coming from military officials on how they have fared so far against the shadowy armed group sounded reassuring. The same air of optimism greeted us inside the provincial capitol with the military displaying a map showing areas that were already under their “control” — roughly two-thirds of the city proper, or so they claimed.

Lt. Col. Jo-Ar Herrera, spokesperson of the 1st Infantry Battalion, also feigned an upbeat mood on how the offensive had been going so far. Sticking to tradition, Herrera dished out the usual body count suggesting that government had the upper hand, capping the press briefing for the day with an emphatic “the best units of the Armed Forces are here.”

But a different story was unfolding in the front. The lines on the map were at best subjective, the numbers can be misleading, as there is no way of telling how the tide of battle had shifted in the treacherous streets outside the capitol. Government forces are dealing with faceless, nameless enemies. They blend with the populace, choose where and when to engage, forcing their adversaries to keep guessing their next move. In fact, a few blocks away from the capitol, an area that was supposed to be under government control, Maute snipers harassed soldiers backed by three armored personnel carriers on the afternoon of May 31.

Judging by that sniping incident, superior government firepower and manpower has only managed to push around — not push away — the Maute Group, which is playing a cat-and-mouse game with the military and police. This is why the siege has lasted beyond anybody’s time frame of a quick resolution.

If government forces opt to play the Maute Group’s game, they would be handicapped by the latter’s better knowledge of the city’s nooks and crannies. If they continue to employ brazen firepower, they will only succeed in reducing Marawi to a heap of dust and rubble, something that may deny their enemies a sanctuary but at the same time anger civilians who will lose their homes and businesses in the process.

Imagine too the amount of priceless family heirloom and cultural treasures that will be lost, and you will get an idea of how deep the resentment would be. One should understand that the Maranaos are proud of their heritage and history. In other words, government can only unleash everything in its arsenal at the risk of destroying an entire city and losing local support.

Decades of fighting the Moro and communist insurgencies should have taught policymakers this lesson: in non-conventional warfare like the Marawi siege, factors other than firepower influence not just the outcome but also the response of people directly affected by it. (MindaViews is the opinion section of MindaNews. H. Marcos C. Mordeno can be reached at [email protected])