DAVAO CITY (MindaNews/05 August) — Am honored to be invited to a town hall meeting at the Advanced Leadership Training for Young Centrists Union (YCU) in Davao City conducted under the Democratic Leadership and Active Civil Society Empowerment (DELACSE) Project of the Konrad-Adenauer-Stiftung (KAS) Philippines and Institute for Autonomy and Governance (IAG).

It’s leadership training. It’s for young leaders. It’s political. To be with them makes us older generation hopeful, whether its manifestation maybe the youth wing of the United Bangsamoro Justice Party (UBJP), the regional branch of the Young Centrists Union (YCU), the Indigenous Peoples Democratic Party (IPDP) and other similar youth political parties.

We are hopeful change can happen. By creating public spaces like this training for young leaders, we are positive the opportunity will  embolden and mobilize the youth to believe in peaceful, political and democratic processes. 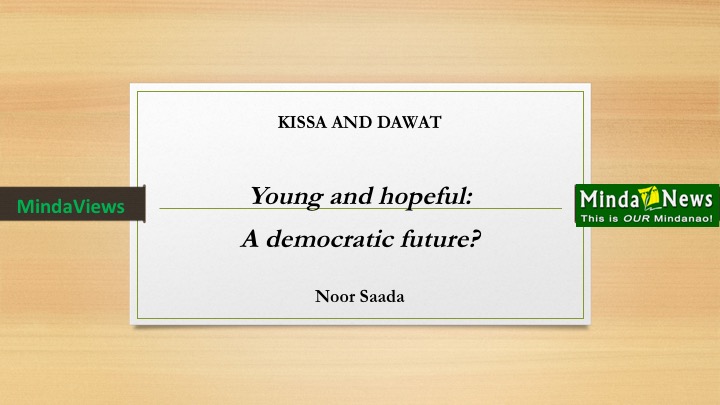 This we view as one potent response to the violent extremism among Moro youth to counter the belief that (drastic) social and political change can only be achieved through violent actions. This is the divide and those who believe in promoting common good need to seize the narrative; if not, the reforms within and the perception outside of the Muslim World, globally, and  Bangsamoro, locally, will be dominated by violent extremism.

Atifete Jahjaga, the 4th and first female president of Kosovo captures the absence of accountability in her statement, “…no accountability, there is abuse, corruption, subjugation and indignation”.

Thus youth leadership has strong repercussion in redressing the historical injustice and the unacceptable status quo of abuse and corruption, and the emergent violent extremism with Marawi City and its people as the current victims.

Democracy is not homogenous although often viewed as monolithic;  like Islam, it is diverse and more like a mosaic, to say the least. Regardless of how it is adopted to local context, there are certain elements that define a democratic society. Below are eight elements as articulated by the Futures Forum Project:

Thus, guided by these basic elements, we are happy for youth leaders commencing their democratic journey. Despite the many socio-political-economic challenges in our midst, there is hope and opportunity for youth engagement in the tasks of state-building and nation-building.

The current drives for Bangsamoro and Federalism are providing an impetus for a new political climate where issues of historical injustices, protracted conflict and self-governance can be pursued through democratic processes.

At this point, young Moro leaders need to educate themselves about the latest developent in the peace processes and federalism movement. It is also imperative that they have sound grasp of the youth vulnerability to violent extremism.

Will the Moro youth leaders be different?  How can they be different from the current partisan leadership and local politics?

The heart for ideology and platform-based political movement will keep clan politics and partisan politics at bay, if not eliminated. Acknowledging the Bangsamoro as integral to the larger Philippines, Moro youth leaders must realize the importance of partnership and networking across the regions, with national and overseas democratic movement.

However it may unfold, the democratic path will assure us that the future will be peaceful and inclusive. There is hope indeed.  (MindaViews is the opinion section of MindaNews. Noor Saada is a Tausug of mixed ancestry – born in Jolo, Sulu, grew up in Tawi-tawi, studied in Zamboanga and worked in Davao, Makati and Cotabato. He is a development worker and peace advocate, former Assistant Regional Secretary of the Department of Education in the Autonomous Region in Muslim Mindanao, currently working as an independent consultant and is a member of an insider-mediation group that aims to promote intra-Moro dialogue).