ILIGAN CITY (MindaNews / 13 Oct) – I shared my thoughts on Mindanao-Sulu history. We were there to figure out what to do with our collective history.

I have said at this part of the past the needs to be recalled, as a reminder, that we cannot live in the past. We need to move forward, in the process creating new dimensions of our collective life.

The truth, I have been writing about it since 1974.

How they became Muslims, transformed into two sultanates of Sulu and Maguindanao, how they were beleaguered for 333 years during the period of the Spanish attempts to subjugate them, were badly battered at the end but were un-subjugated and proud.

But in the next event they became victims, all of us in the Philippines, of the Treaty of Paris between the US and Spain, and lost in what we think is “the Filipino – US war” and “the Moro-US war”. We, our territories, became the one colony called: “The Philippine Islands: Our Insular Possessions”.

Within this situation, among our peoples, as subjects of the colonial policy of amalgamation or integration or fusion, the Moros and the Lumad were transformed into marginalized and minorities in their own domains.

At the end of the colonial regime, they became part of the Republic of the Philippines, during within which we saw the continuation of many things that were initiated by the two colonial events.

This is where we are now, the part of convergence, not yet complete, but ongoing, leading to reconciliation, harmony and peace.

I have noticed that the emotional dimension has never been officially acknowledged as an integral part of the problem, the central feature is the divide among and between the Christians and the Moros and the Lumad.

This is why the struggles are intense efforts to extricate themselves from this situation and asserted them as Bangsamoro and Lumad, respectively.

Opposition to these efforts generally emanate from the Christian migrants under the cloak of protecting the interest of the Republic of the Philippines.

It is from this side where I hear comments like, wipe them out to solve the Moro problem; it is from here that emerge the expressions of spontaneously and automatic opposition to inclusion to Moro their territorial claim, it is from here that I became a subject of “persona non grata” official resolution by no less than the city council where I reside – for my participation in the MOA-AD in 2008.

I am not taking this personally; this is a demonstration of the emotional dimension of the problem which I have seen and felt in my researches, travels and lectures and feedbacks from my audiences in Mindanao since 1973, to the present; the persona non grata happens to be new for me.

This latest has increased my felt need for mutual acceptance, harmony and peace in my package; in my language it is: husay … sandugo … kapatiran among the tri-people. 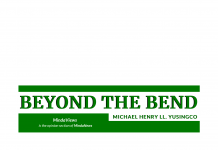