Home Mindaviews QUARANTINE DIARIES: The Elderly and the Pandemic 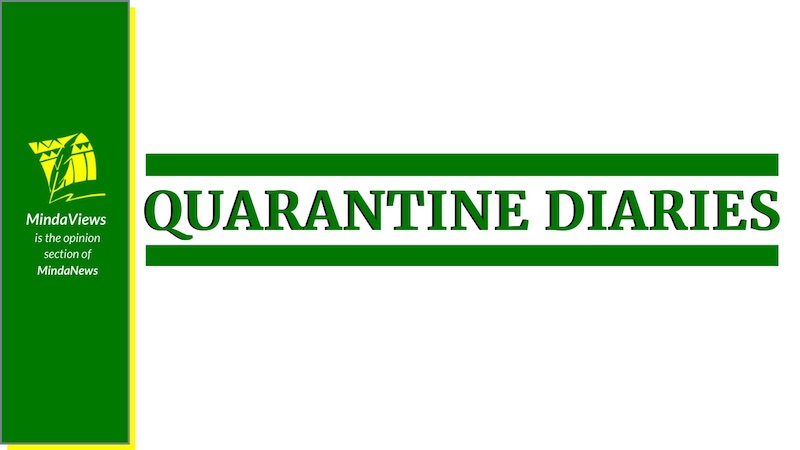 DAVAO CITY (MindaNews / 02 February) — I thought we will not get to this point when we will have to decide on putting our old parents in nursing homes. I thought the concept is very Western and not apt for Filipino culture. Filipinos are brought up to take care of our elderlies until the end. We were raised to look after our parents in their old age as a gesture of payback, love, honor and respect.

I was all wrong. With the curse of the COVID-19 pandemic (thanks to government’s competence, re-assuring and inclusive programs!) the elderly citizens have been restricted of their mobility. The elderly as immuno-compromised are locked down for eternity. You could just imagine the psychological effect of this on our old parents, grandparents and all elderlies. They, who have lived an active life, who enjoyed the company of people, especially grandchildren and relatives, friends and kababayans, are independent and vibrant, suddenly found themselves restricted and confined within the premises of their abode.

Exactly one year since the dreaded virus wreaked havoc on a global scale, we still find ourselves wondering when this will all end. As we adjust to the new normal of life under a pandemic, our family is finding ways to cope, manage and address not only the medical but also the psychosocial needs and mental health of our father who at 89 has Alzheimers.

I experienced the anxiety when I learned that our Dad was missing for some hours only to be brought home by Barangay Tanods, who narrated how they found our father during the wee hours of the morning in his sleepwear of boxers shorts and sando walking around mindlessly and seemed to be at a loss. Of course they had to accost him not only because of the curfew but because he was not wearing a face mask and being a senior citizen must not be out of the house. They approached him but was unable to identify himself neither his address, my sister’s residence.

Our Dad moved back to Manila from Davao about eight years ago. All he had narrated to the Tanods was that he fell asleep at her daughter’s house and he wants to go back to his own house which in his mind is just one subdivision away. But as he walked around, he couldn’t find his way. I felt like crying because his memory was still in Davao where my house is just tricycle away to his house where he used to live with my Mom. My Mom passed away in 2006 but perhaps his memory was still vivid pre-2006 when he would often spend time in my house to look after my young children and then go back to his home at night when I return from work. So I thought this is how it is with Alzheimer’s disease.

Now, with the reality that similar incident cannot be avoided, I have been gathering tips from people with parents stricken with Alzheimer’s. But it becomes complicated when he does not cooperate. He claims to have a mind of his own. He detests all kinds of monitoring and restrictions. He wants to have freedom. Quite understandably.

Perhaps, there are other options. Maybe I can have him back in Davao, where my children are stay-at-home all the time, again because of COVID-19. Underaged and online schooling, they can be with their grandfather most of the time. I have a backyard garden that he can tend to as he used to do. He can do his walking but only around the subdivision as elderlies are allowed to do in the city. But with his heart condition, his doctors do not recommend air travel and long distance trips.

I find myself at a loss. Were it not for this pandemic, maybe it is easier to handle my father’s condition. Maybe nursing homes can easily accommodate him. Maybe our father would be less stressed and more cooperative. Maybe we are better off with more options. Maybe our elders and senior citizens are happier and contented in the blissful company of children, grandchildren, relatives and friends.

(MindaViews is the opinion section of MindaNews. Carmen Lauzon-Gatmaytan is a human rights and justice advocate. She has been involved in various women, peace and security initiatives in Mindanao since the 1990s. She is currently a civilian protection worker of an international peace-keeping NGO based in Cotabato City but because of the pandemic has been working from home in Davao City.  She posted this piece on her FB page on 31 January 2021. MindaNews was granted permission to publish this piece. Others in similar situation may want to share their experiences as well as the options they have taken).