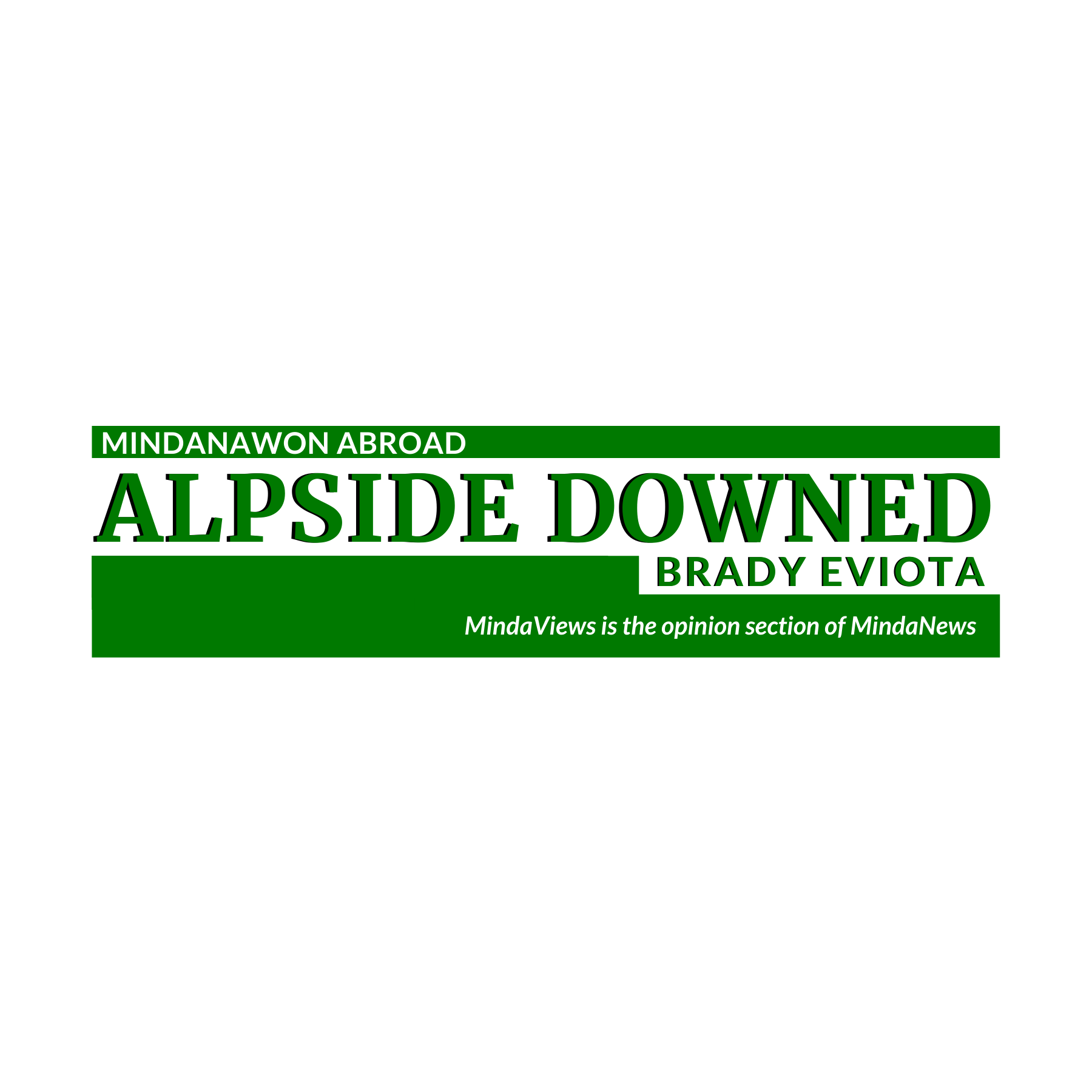 BERN, Switzerland (MindaNews / 22 October) – My wife Theresa and I were on a quick trip last week to Malta, a small island nation with a rich and rather long and complicated history. And there we learned a few lessons on the way.

The first was not to step off the curb so quickly. Malta drives left, a legacy of the colonial system set up by the British in the 1800s. Many times we were shocked to see vehicles coming from what we thought was the wrong lane, and it took a few days to settle down to this strange situation.

I was first in Malta some eight years ago for meetings with other Filipino leaders in Europe, but had little time to explore the archipelago, which including the islands of Gozo and Comino is only about 316 square kilometers in land area. The best reason to visit Malta in a week, I told my wife, was its small size. Everything was nearby, the public transport was efficient, and the coastal promenades were pleasant to walk on. Hakopabol lang kaayo.

Back then, the Filipinos I met were still few, some acting as stewards for the villas of their absentee British amos who only visited when it was winter in Europe.

Now, we were surprised to see that there are about 6,000 Filipinos (only an estimate) in the island.  Some of the Filipinos were fairly new arrivals, brought by their  employment agencies from Dubai during the pandemic. Many were public bus drivers, some of them were sushi chefs or worked in the restaurants and the rest were in the shops and other tourism businesses. Many had also emigrated from Italy where there is stiff job competition.

Inside a food court on Triq Il-Mirkanti (Merchant Street) in the capital Valletta, we discovered with delight the “Pinoy Street Food” kiosk which is Filipino-staffed and offered huge bowls of delicious Pinoy food. From the small talk, my wife learned that the cashier there (a gay) was the trainer of the Maltese candidate to the coming Miss Universe pageant in December!

I noted the irony that Malta – a member of the European Union since 2004 – had gained its independence from the British on 21 September 1964, on the same date that we Filipinos had lost many freedoms under Marcos in 1972.

We had three glorious days of sun and good weather which allowed us to explore the islands and the countless tourist spots of Malta, which has three UNESCO World Heritage Sites including its capital Valletta. We learned that there are more than 360 churches in the archipelago. That’s right – one church for each day of the year!

On our fourth day however, we ran into a thunderstorm as already forecast in weather apps. The strong rains and the quick flooding of the drain-less streets forced us to seek shelter in a cafe in Zurrieq (as in “Zurich”) where the elderly male habitués warmly greeted us as unexpected guests. For our pains we were gifted on the spot with a calendar of the Virgin Mother Mary.

The Maltese are warm and friendly to visitors, and that is crucial to  a tourist-dependent economy where up to 1.6 million tourists visit per year. During high season in summer, there might be three times more tourists than there are residents (now numbering 515,000).

Like the Italian and the nearby Sicilians, the Maltese love cars, although they prefer small cars to make for easier driving and parking in the tiny ancient streets. Car ownership in Malta is exceedingly high, considering the very small size of the islands; in fact, car ownership is the fourth-highest in the European Union.

In our hop-on, hop-off tours, we discovered that the Maltese tourist bus drivers are among the most skillful, often maneuvering through incoming traffic with inches to spare from the  house balconies. To be Maltese, I thought, is to be patient enough to back up and let other drivers pass when they have right of way;  otherwise, nobody gets their way in the tight streets. How to survive a bottleneck? Try the patience of Maltese drivers!

Back in the hotel, I reveled in saying aloud the exotic-sounding names of the places we went to— Tas-Sliema, Mdina, Rabat, Xlendi, Birgu, Qormi…and also the tongue twisting Marsamxett and Marsaxlokk and Birzebugga.

Malta has an ancient culture. Imagine all these people ruling the islands at one time or another – the Phoenicians and Carthaginians, the Romans, Greeks, Arabs, Normans, Aragonese, the Knights of St. John, the French, and also the British! These foreign influences have certainly left their mark on the country’s food, arts, music and culture.

The most important lesson that we learned however, was that Malta had already reached herd immunity. A tourism site claims that Malta was the first country in the European Union to start vaccinating people over 16 years of age, and that 70% of the adult population is now vaccinated with at least one dose of the COVID-19 vaccine, while 42% of the population is now fully vaccinated.

I checked the Worldometers.info site and saw that Malta registered only 11 new Covid cases on October 18 and no new deaths, making it a fairly safe destination for travelers.

While other countries still look for vaccines, the Maltese populace now freely go about their daily lives, even if face masks are still strictly required indoors in public places and in public buses. I saw only a few elderly people wearing a face shield (or face hood as it is called here) but with no face mask underneath. Going to Malta was no hassle – we only had to fill in online an EU Digital Passengers Locator Form and upon entry at the airport, to show our EU-approved Covid vaccination certificates. I asked myself: Would the Philippines be enjoying the same social freedoms now if its leaders had acted with dispatch and urgency in the pandemic?

(Mindanawon Abroad is MindaNews’ effort to link up with Mindanawons overseas who would like to share their thoughts about their home country and their experiences in their adopted countries. Brady Eviota wrote and edited for the now defunct Media Mindanao News Service in Davao and also for SunStar Cagayan de Oro. He is from Surigao City and now lives in Bern, the Swiss capital located near the Bernese Alps)