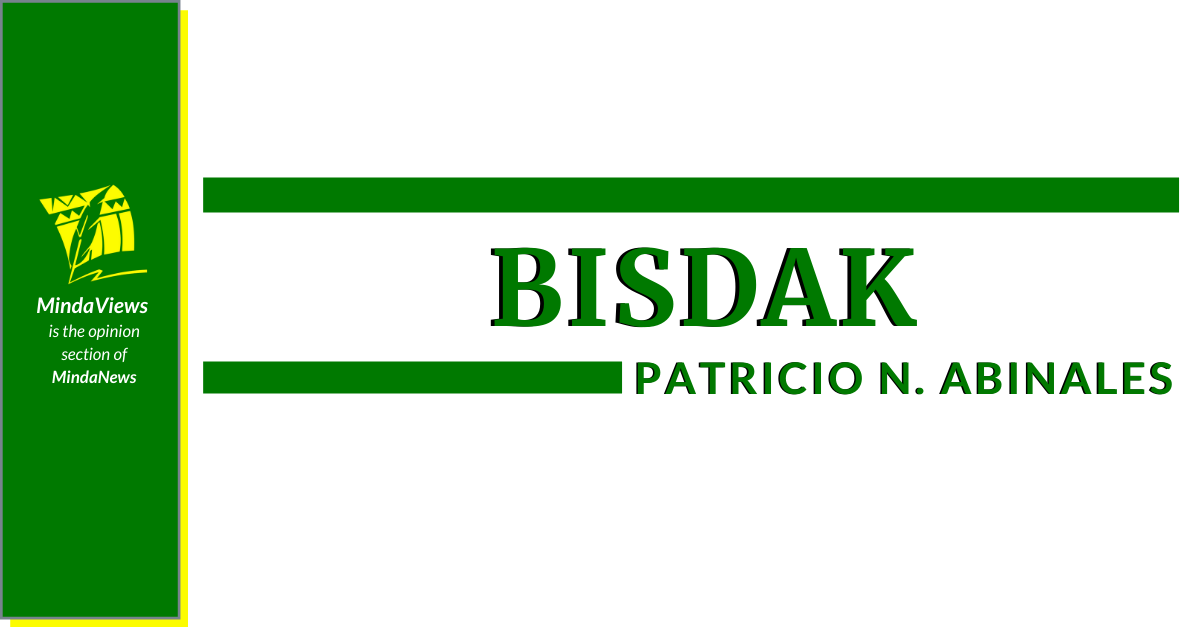 HONOLULU (MindaNews / 13 December) — A quick look back at Philippine history suggests that this was not the case. Consider the following description of one of our most persuasive politicos, Manuel Quezon. In its June 6, 2020 issue, Esquire’s e-edition described Quezon as having a “potty mouth” because many of his conversations begin – or end – with the word puneta. But Don Manuel was more than that. The historian Carlos Quirino wrote of an episode where Quezon’s use of foul language went beyond puneta, and this is worth quoting. Quirino recalls:

“When Quezon was campaigning against the H-H-C Act in Tanawan, Batangas (a country dominated by Jose P. Laurel, of the OsRox faction), he was greeted coolly. Quezon spotted a cross-eyed man and said, ‘Hey, putang ina mong duling…What are you doing here?’ Quezon placed his arm around the shoulder of the cross-eyed man who smiled broadly in return. This touch of friendliness thawed out the crowd, good-natured laughter rose, then cheers followed by applause. Needless to add, the political meeting was a success. ‘Who was that cross-eyed man whom you greeted, Mr. President?’ asked one of his henchmen after the meeting. ‘I’ll be damned if I know his name,’ replied Quezon. ‘This is the first time I’ve ever seen him in my life!’”

Manuel Quezon – a town prosecutor who began his political career as a protegee of an American Constabulary officer – became the President of the Philippine Commonwealth, the transition regime before granting Philippine independence.

Neither was Quezon alone in this; anyone growing up in the provinces of the Philippines watching campaign speeches is familiar with such tirades, especially when spoken in the language or dialect of the area. The audience would often reciprocate with their sexual ditties, like this one I remember from my childhood, about a vice presidential candidate named Fernando Lopez: “Si Fernando Poe Lopez, walay karsones, ang otin talinis sa public service. Roughly translated and sung to the tune of the American children’s song “On top of Spaghetti,” it goes like this: “Fernando Poe Lopez, has no pants, his penis is so sharp, for public service.” His middle name in this ditty, “Poe,” is not his but of action star Fernando Poe Jr.

How about Duterte’s advocacy for brutality and misogyny? Again, Duterte is hardly unique. He reminds me of another strongman, former Ilocos Sur governor Luis “Chavit” Singson, implicated in an incident that merited space in the newspapers. On September 2, 2009, according to news reports, his common-law wife, Rachel “Che” Tiongson – who has five children by Singson – filed a complaint against him for violating Republic Act 9262 (or the Anti-Violence against Women and Children Act) for beating her up – as well as her male friend – at her apartment.

When the media interviewed, Singson told his side of his story, saying that a year before, “I caught her with a young actor.” He said he forgave her, agreed to her request that they should not separate, and even found her an apartment adjacent to their house in one of the most expensive golden ghettoes of Manila “for the sake of the children.”

Singson, however, ordered his bodyguards to surveil Che and caught her with another man. He said he confronted both at her apartment but refused to say whether he did the beating or ordered his bodyguards to do it. Singson said, “They were only beaten and punished,” adding that she should consider herself lucky because he was a good person and that if it had been another man who caught her, both would have wound up dead. “I am a good person, so I did not get them killed. I just told her to leave the house,” he said.

An investigative journalist was able to piece together a starker picture. Ellen Tordesillas wrote in her blog that –, and I am translating her Filipino prose here – “The public witnessed Chavit’s inhuman treatment of Tiongson, the mother of his five children after he caught her with her boyfriend. She was whipped like an animal. The talk was that his bodyguards beat her boyfriend naked. Some even said that they used a hammer to bash his penis. I do not know if this is true. The public also saw Singson’s arrogant response and his claims that he was on the right. And that they were lucky that he did not have them killed.”

Today Singson is in the crew of the famous boxer Manny Pacquiao and presently owns the Miss Universe franchise. Not bad for the former town police chief of Ilocos Sur, who became the province’s strongman in the late 1960s and outlasted all the Presidents he served or fought.

What puts Duterte in a class of his own is, as the DSI (Duterte Studies Industry) rightly points out, his turning the viciousness of local politics into a staple of national politics. But we have very little from the DSI when it comes to the question of how all these things came to be. Let me try to venture a couple of explanations in Part 3.

[MindaViews is the opinion section of MindaNews. Patricio N. Abinales, an Ozamiznon, teaches at the University of Hawaii-Manoa. He studies the four-legged rat (a pestilence that brought famine in many parts of postwar Mindanao) and the two-legged rat (the politico)]