With the theme “Building Bridges,” the event on May 29-31 is a  follow-up to the Second Asia Pacific Interfaith Dialogue in April 2006 in Mactan, Cebu and to the first one in December 2004 in Yogyakarta,  Indonesia.

President Gloria Macapagal-Arroyo will deliver her address on the first day of the three-day event at the Copthorne Hotel in Waitangi,  immediately after the opening address of New Zealand Prime Minister  Helen Clark and before the official statements of Indonesian Foreign  Minister Nur Hassan Wirajuda and Australian Foreign Minister Alexander  Downer.

The High-Level Symposium was a major initiative of the United Nation’s Alliance of Civilizations (UN-AOC) through the governments of Spanish  Prime Minister Jose Luis Rodriguez Zapatero and Turkish Prime Minister Recep Tayyip Erdogan.

Even before UN Secretary General and former South Korean Foreign Minister Ban ki-Moon appointed former Portuguese President Jorge  Sampaio to become the High Representative to the UN-AOC, the  Philippines had already become one of the 21 initial member-nations of  the so-called “Friends of the Alliance of Civilizations.”

For the 3rd Asia Pacific Interfaith Dialogue in New Zealand, the head of the 13-member Philippine delegation is Marbel (South Cotabato-Sarangani) Bishop Dinualdo Guttierez, who is also representing the Catholic Bishops Conference of the Philippines-National Secretariat for Social Action (CBCP-NASSA).

Among the 12 other members of the delegation to the proposed Waitangi Declaration is Cagayan de Oro City Archbishop Antonio Ledesma,  representing the Episcopal Commission on Inter-religious Dialogue (ECID).

The delegation also includes representatives of the Philippine Council of Evangelical Churches (PCEC) through Bishops Efraim Tendero and  Cesar Punzalan, who together with Archbishop Ledesma and Bishop  Guttierez as well as Commissioner Taha Basman of the Philippine  Islamic Council (PIC) all represent the Interfaith Commission (IC).

The Philippine delegation also includes representatives from the Miriam College’s Center for Peace Education (MC-CPE), the Interfaith  Center for a Culture of Non-violence (ICCN), the Peacemakers Circle Foundation Inc., and the Bishop Ulama Council (BUC) Secretariat.

For the government, the delegation includes officials of the  Department of Foreign Affairs (DFA), the Presidential Council on  Values Formation (PCVF), and the Office of the Presidential Adviser on  the Peace Process (OPAPP).

According to Dureza, the country is home to more than 80 percent Roman  Catholics, 5 percent (5%Muslims, and about two percent (2%) each from  the group of Evangelicals, Aglipayans, and Iglesia ni Kristo based on  the Philippine religious diversity profile for the Waitangi Dialogue.

“The nation is a diverse, multi-cultural country which is home to many  faiths and religions as well as to 90 known ethnic groups subdivided  into more than 150 ethno-linguistic communities scattered in over  7,100 islands,” Dureza said. (OPAPP) 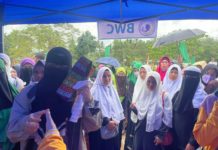