DAVAO CITY (MindaNews/21 April) — The Government of the Republic of the Philippines (GRP) and the Moro National Liberation Front (MNLF) on Tuesday signed a Memorandum of Understanding in Tripoli, Libya to continue working on the implementation of the Final Peace Agreement of  September 2, 1996, the  Office of the Presidential Adviser on the Peace Process (OPAPP) said.

Assistant Secretary Camilo Miguel Montesa of the OPAPP, signed for the government while Nur Misuari, chair of a faction of the MNLF and presently a candidate for governor of Sulu, signed for the MNLF.

Indonesian Ambassador Rezlan I. Jenie, chair of the Organization of the Islamic Conference-Peace Committee for the Southern Philippines (OIC-PCSP), signed for the OIC-PCSP at the World Islamic Call Society in Tripoli, Libya.

The tripartite review was recommended in May 2006, when the OIC sent a fact-finding team to look into the implementation of the 1996 peace pact.

The first meeting, however, was held in Jeddah in November 2007.

On March 13 last year, a tripartite meeting among the  OIC, Philippine government and MNLF, was held at the Heritage Hotel where it was agreed that a Legal Panel with members coming from both the government and the MNLF be tasked to transform the common proposals between them into legal form and to arrive at common grounds to move forward on the issues for further study.

The legal panel’s work was presented to the GRP and MNLF leadership which agreed  to transform these salient points into an MOU.

The parties agreed to continue working on the contentious issues and “the result of which shall be transmitted to the President of the Philippines for referral to the Congress of the Philippines as certified administration bill.”

The parties also agreed to set up a fund mechanism to pursue economic development in southern Philippines which is being supported by the OIC.

The fund mechanism, dubbed “Bangsamoro Development Assistance Fund (BDAF) , was set up through Executive Order 872 signed by Pres. Gloria Macapagal-Arroyo  on March 16, 2010 as the implementing arm for the economic catch-up plan on the implementation of the 1996 GRP-MNLF Peace Agreement.

On September 2, 2006, the 10th anniversary of the peace agreement in 2006,  Executive Secretary Eduardo Ermita, President Arroyo’s representative to the 10th anniversary rites at the Royal Mandaya Hotel, announced that the Philippine government was reactivating the Southern Philippines Development Authority (SPDA) and mandated it to focus on the “socio-economic catch-up plan” for the areas of autonomy.

Jesus Dureza, then Presidential Adviser on the Peace Process, told MindaNews after the anniversary rites that the reactivated SPDA was specifically “for the catch up plan for the MNLF.”

“For peace to really be permanent, it has to be just,” Ambassador Sayed El-Masry, then adviser to the secretary-general of the OIC and head of delegation of the OIC Field Visit to Southern Philippines, told civil society groups in Davao City during their fact-finding in May 2006.

He pointed out that a “wide gap” exists between the assessments of the pact’s implementation  by government and the MNLF. (Carolyn O. Arguillas/MindaNews) Combatant awaiting decommissioning: “They are lucky they were not born during wartime and did not spend most of their years in a war situation” 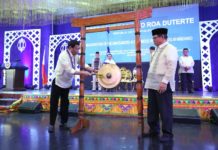