“ As you can see, nobody is here. We are no longer on alert,” he told MindaNews. 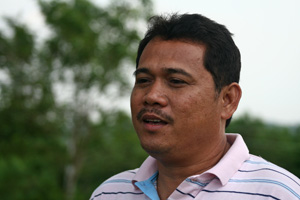 Cabaya said the CVOs, who are also farmers in the village, can work on their farms without having to carry their rifles or being watched by fellow armed CVOs.

“You can see that it has been a long time since the CVOs have utilized this post,” he said.

Cabaya recalls that in the wars in 2000, 2001, 2003 and 2008, they mounted several machine guns and mortars to defend this village from guerrillas of the Moro Islamic Liberation Front.

Though the running trenches are still evident, it is now covered with thick grass and the surroundings are now planted with vegetables.

The outpost, which they call the “frontline,” is located on a hill overlooking the barangays of Dungguan, Mampurok and even Baliki in Midsayap town.

But today, he said, the villagers work on their farm without any fear.

With the signing of the Framework of Agreement on the Bangsamoro, Cabaya said he is hopeful it could bring positive changes inside and outside the proposed territory.”

“What is important is the good relationship among the Muslims, Lumads and Christians,” he added.

Aside from the frontline outpost, Cabaya also showed an active outpost along the national highway and right at the junction leading to the frontline.

Though there are CVOs on duty, there are no guns on display. Instead, MindaNews found grass cutters on the fortified wall, where they used to mount the machine gun facing the national highway.

“They used to mount a machine gun here. And this outpost is always manned with armed CVO. But now, you can only find a grass cutter,” the mayor added.

But Baglolibas Kagawad Nor Zaydee Lozada told Mindanews that they are still vigilant despite the seeming normalcy in the area.

She said the CVOs are still taking turns in manning the outpost along the national highway as part of their security measures against lawless elements targeting their farm animals.

Unlike the ill-fated MOA-AD, the process of coming up with Framework Agreement was more transparent, the mayor said.

“One of the lessons from MOA-AD was that we were not consulted. When they were about to sign it, that’s the time we knew about the agreement, “ Cabaya said.

“We were assured by the government peace panel that there would be no signing until the local leaders have enough knowledge,” the mayor added.  “Though this is far from over, since the details have yet to be crafted, we are hopeful that this would be the genuine solution to the decades of conflict in Mindanao.”

Kato and his men stormed the villages following the aborted signing of the MOA-AD on August 5, 2008.

Three of 19 barangays here voted Yes to inclusion in the Autonomous Region in Muslim Mindanao (ARMM) during the August 2001 plebiscite. These are the barangays of Dungguan, Lower Migading and Tapodoc, villages that are now part of the proposed Bangsamoro Core Territory.

Migading village chief Boy Montero told MindaNews that he has yet to call a consultation with his constituents.

A former member of the Moro National Liberation Front, Montero admitted  he was also surprised that only three barangays are included in the proposed territory.

“For me, we don’t mind who would govern us for as along us we will understand each other. But we need to consult our people first so that we would not be blaming each other whatever the outcome is,” he explained.

Lower Migading is about three kilometers from the national highway. (Keith Bacongco / MindaNews)