DAVAO CITY (MindaNews / 19 May) – “Wide consultations on how to craft the Bangsamoro peace roadmap” will be conducted when the Duterte administration takes over on June 30, lawyer Jesus Dureza, the returning Presidential Adviser on the Peace Process (PAPP) said.

Dureza, who had served as PAPP (July 2005 to June 2008) under the Arroyo administration and was named to the same post by incoming President Rodrigo Duterte, issued this statement Thursday in reply to a query by MindaNews as media pronouncements of incoming Davao del Norte Representative Pantaleon Alvarez, Duterte’s candidate for House Speaker,  drew a lot of criticisms, especially from the Moro people. The incoming Duterte administration has to deal with these two peace agreements, both of them on the implementation phase – the CAB two years after the signing and the last remaining issues of the FPA after 20 years.

The PDI also quoted Alvarez as saying “there’s no more need” for a Bangsamoro Basic Law (BBL) because “that’s moot already. There’s no point to it anymore” in view of the plan to amend the 1987 Constitution to shift to a federal system.

He said by midterm elections or by 2019, the proposed amendments should have been submitted to a referendum. “Before the end of his term, we should be in transition, and, hopefully when he (Duterte) steps down, we have a new form of government,” the PDI report quoted him as saying.

In his interview Thursday in Karen Davila’s Headstart over ABS-CBN News Channel (ANC), Alvarez said there is no need for a BBL because “it will be replaced by a federal form of government.”

“How can you implement the provisions of the BBL without amending the Constitution?” he asked, adding there are provisions in the BBL that are contrary to the 1987 Constitution and would have been struck down by the Supreme Court for unconstitutionality.

To rectify this, Alvarez said the 17th Congress under Duterte will amend the Constitution “to provide what is inside the agreement of the BBL,” he told Headstart.

The CAB provides for the passage of a BBL that would pave the way for the establishment of the Bangsamoro, the new autonomous political entity that would replace the Autonomous Region in Muslim Mindanao (ARMM). The proposed Bangsamoro would take on a parliamentary form of government.

But the 16th Congress under the Aquino adminsitration junked the BBL drafted by the joint government-MILF Bangsamoro Transition Commission (BTC) in May 2015 when the Ad Hoc Committee on the Bangsamoro Basic Law approved the removal of alleged unconstitutional provisions in what would become a watered down version referred to as the Basic Law for the Bangsamoro Autonomous Region (BLBAR).

The Senate Committee on Local Governments chaired by Senator Ferdinand Marcos also
junked the BTC-OP draft and made its own version of a law it also titled BLBAR.

The Transitional Justice and Reconciliation Commission (TJRC) in its report made public in launching rites in Cotabato City on March 15 and Manila on March 16 had noted that the Bangsamoro narrative of historical injustice is “based on an experience of grievances that extends over generations” and is a result of three interlocking phenomena: violence, impunity, and neglect.

The report said these interlocking phenomena are rooted in the imposition “by force” of a monolithic Filipino identity and Philippine State “on multiple ethnic groups in Mindanao and the Sulu archipelago that saw themselves as already pre-existing nations and nation-states.”

The report’s recommendations have yet to be implemented.

In his campaign sorties, Duterte, the lone Mindanawon Presidential candidate would tell the crowd his grandmother was a Maranao and he has grandchildren who are Tausug. He would spend time to talk about Philippine history from the point of view of Mindanao and how the Moro people have been marginalized and minoritized and how important it is to “correct the historical injustice.” 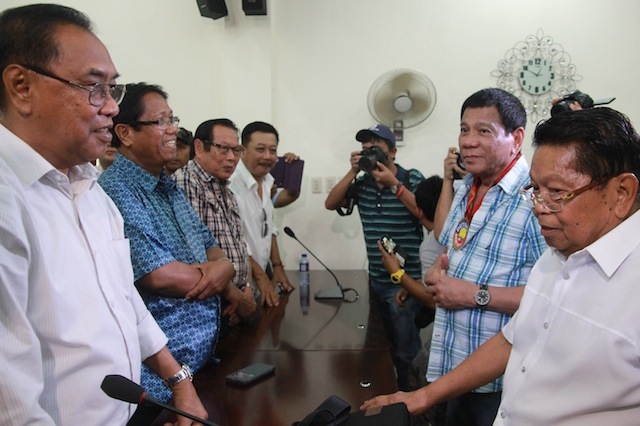 Duterte told them that he would propose amendment of the Constitution to change the system of government into federalism but “if it takes time, and if only to defuse tension, in my government I will convince Congress to pass the BBL then make it as a template for federal states.”

At the Cotabato City plaza rally on the same day, Duterte stressed the need to correct the historical injustices committed against the Moro people and vowed that under his administration, “we will try to go federalism. Yang Bagsamoro sa mapa ngayon, wag nang galawin yan. Gawin na lang nating example na makopya sa lahat. Ang mangyayari nito, uunahin ko na lang pakiusapan ko ang Congress na we will pass the BBL (The Bangsamoro on the map now, let’s not touch that anymore. Let’s make it an example for the rest to copy. I will immediately ask Congress to pass the BBL).

He said he will also tell Nur Misuari “kopyahin na lang natin sila para sa Mindanao at buong Pilipinas” (let’s copy that in Mindanao and in the rest of the Philippines”).

Misuari, whom Duterte considers a friend, is founding chair of the MNLF with whom government signed a Final Peace Agreement in 1996 and whose implementation has yet to be fully completed.

In the last Presidential debate on April 24, Duterte said “nothing will appease the Moro people if you do not give them the BBL.”

Amina Rasul, chair of the Philippine Center for Islam and Democracy (PCID) said federalism does not render the BBL moot.

“It is an affirmation of the historical fact of a distinct identity for the Moros and the fact that they were independent states even before a Philippine state was ever conceived, that a historical injustice was committed by the Filipinos and the Philippine state by depriving the Moros both of their identity and freedom to chart their own destiny,” he said.

“The only way to address this, as correctly pointed out by Duterte in his campaign, is to correct this historical injustice,” Sinarimbo said.

He said the Bangsamoro people supported and overwhelmingly voted for Duterte “but some politicians who are now jockeying for positions under his administration are already reversing and/or nullifying the principles that (Duterte) has committed himself to vis-a-vis the resolution of the Bangsamoro Question.”

“We welcome the establishment of federalism as the best alternative to the status quo. There ought to be no argument here. But the politicians who now want to ingratiate themselves with Digong Duterte are doing so at the expense of the President-Elect’s commitment to the Bangsamoro people,” Alonto said.

“What sets apart the Bangsamoro people from the other nations comprising the Philippine State is that the Moros struggled, fought and bled to recover their right to self-determination,” he said.

“As such, government is duty-bound to implement it. To make it ‘irrelevant’ as Alvarez claims because of federalism is to sidetrack, nay nullify, this political agreement,” and will not sit well with the Bangsamoro people and the Moro liberation movement,” he added.

Randolph Parcasio, spokesperson of the MNLF under founding chair Nur Misuari said “maybe he (Alvarez) needs to be thoroughly updated so give him time to digest more the ongoing peace process.”

“When the dust of euphoria settles down, we get down to business. The MNLF waited for two decades then it unconditionally supported Duterte because just like the majority among Moro and Mindanawon the MNLF sees hope at last…So gamayng pasinsya pa (a little more patience), Parcasio said. (Carolyn O. Arguillas / MindaNews)