Home Peace Process GRP-NDF 10th ID spokesperson on peace talks: It must take place under a...

DAVAO CITY (MindaNews/28 December) — Soldiers also look forward to the resumption of peace talks between the government and the communist-led National Democratic Front (NDF) but it should take place under a ceasefire, the spokesperson of the 10th Infantry Division stationed in Camp Panacan here said.

”Peace is what we soldiers want,” said Lt. Col. Medel Aguilar, 10th ID spokesperson. “Peace talks would be good for us all, especially if these are conducted under a ceasefire.”

Aguilar said even the New People’s Army, armed wing of the Communist Party of the Philippines “must also want a ceasefire, knowing how difficult it is to be in the mountains and in the battlefield.”

“I think our people are also in favor of the ceasefire, if only they will speak up,” he said.

”But since the CPP does not want a ceasefire, then we’ll continue in our community works to eliminate conditions that will allow them to recruit more members,” he said.

”Personally, I don’t understand the CPP’s statement saying they have taken the path to peace while declaring at the same time its plan to intensify its offensive actions against the government,” said Aguilar, reacting to the statement made by NDF spokesperson Jorge Madlos, popularly known as “Ka Oris,” on the CPP’s 42nd anniversary Sunday.

”Of course, our soldiers will always be ready to destroy armed groups sowing terror in the communities,” the Army official said.

In its earlier statements, the CPP has repeatedly warned the Aquino government against pursuing peace talks premised on “immediate ceasefire”, saying it will not lead to the peaceful resolution of the 42-year-old conflict.

“For the armed revolutionary forces, engaging in peace talks while their weapons are tied up, violates the revolutionary principles and virtually holds us hostage,” said the CPP’s July 28 statement this year.

“It would be foolish for us to expect to talk on fair and equal terms regarding life-and-death questions with the other side, when we have our arms dropped while the forces on other side have the barrels of their guns pointed at our heads,” it added.

The group urged Aquino to pursue talks without preconditions, and based on “previously agreed principles.”

The CPP pointed out that the three-month ceasefire in 1986 under the late President Corazon Aquino did not yield fruitful results compared to the progress of the peace talks under former President Ramos.

Ramos had agreed to throw away the “earlier premise of tying the talks to an immediate and prolonged ceasefire agreement.”

The peace talks under Ramos had forged important agreements, among them, The Hague Joint Declaration of 1992 which set forth the framework, principles and sequence of peace negotiations; the Joint Agreement on Safety and Immunity Guarantees (JASIG) in 1995; and the Comprehensive Agreement on Respect for Human Rights and International Humanitarian Law (CARHRIHL) in 1998.

“If Aquino insists on having peace talks premised on an immediate ceasefire, he will be reducing his peace declarations to empty rhetoric,” the CPP statement said.

The NDF abandoned the peace talks in 2004, accusing the administration of former President Gloria Arroyo of instigating the United States and the European Union to place the communist movement in their lists of terrorist organizations.

Col. Leopoldo Galon, Jr., commander of the 5th Civil Relations Group, told reporters early this month they are looking forward to the peace talks and that he has “high confidence” that peace talks will resume under the Aquino administration.

”We have a ‘popular’ president and an ‘unpopular’ insurgency movement,’ he said.

“War only displaces people and entails costs for the government,” he said, adding that aside from the cost of ammunition, weapon and soldiers’ upkeep, the social cost of war is also too staggering to account for.

”In the spirit of Christmas and human rights, we are in favor of the peace talks,” Galon said. (Germelina Lacorte/MindaNews)

Ceasefire holding; Sison says he is ready to meet Duterte in Hanoi 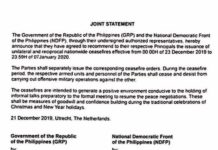