Father and son from Barangay Bualan in Pikit, North Cotabato prepare their belongibgs before heading to the evacuation center in Barangay Batulawan on Tuesday, 21 Aug 2012. Hundreds of families have fled the remote villages of Pikit and Aleosan due to the reported presence of the Bangsamoro Islamic Freedom Fighters (BIFF). Mindanews Photo by Ralph Elusfa 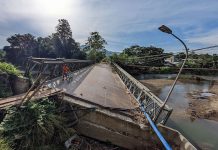