Among the driftwoods at the exhibit titled”Debri(s)fieng Art: An Exhibit of Found Natural Sculptors” at the Lluch Park Garden in Iligan City. The driftwoods were gathered by sculptor Julie Lluch and sister Almita Lluch-Cruz from the shorelines of Iligan City after Typhoon Sendong brought down thousands of logs and other debris from the mountains. They then cleaned and spruced up the debris with the help of fellow artist Robert Fuentes. The exhibit opened Friday, Sept. 21, 2012. MindaNews photo by Bobby Timonera 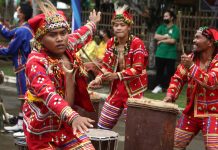 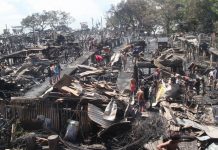