Home Photo of the Day To Safer Grounds Residents ride on pedicabs, motorcycles, cars and even run to the relatively higher ground of the Surigao del Sur provincial capitol in Tandag City August 31, 2012 after the 7.6 magnitude earthquake near Samar. Authorities later declared a tsunami alert level 3 on the eastern parts of the country. MindaNews photo by Erwin Mascarinas 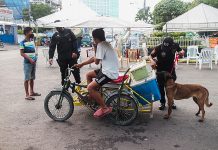 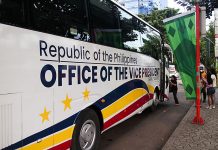