Outgoing Mayor Vicente Emano (center in violet shirt) bades goodbye during the oath taking of the new council members in Cagayan de Oro City on June 28, 2013. Emano was defeated by former Gov. Oscar Moreno of Misamis Oriental. It was Emano’s first defeat in his three decades in politics. MindaNews photo by Froilan Gallardo 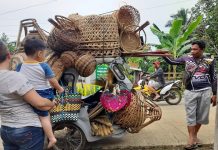 One town a day