An attendant packs a couple of “Lolong” bread at a bakery store in Bunawan, Agusan del Sur province on June 16, 2013. The bread was named after the 20.4-foot long crocodile that was captured in Agusan Marsh on September 3, 2011 and died last February 10, 2013. MindaNews photo by Toto Lozano 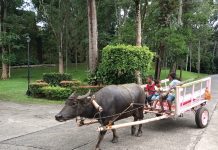