Home Photo of the Day Home for Christmas Ruby Samano hugs her husband, Corporal Benjamin Samano after he and Pfc Alvin Ricarte were released by the New People’s Army in Montevista town, Compostela Valley on December 21, 2014. The two soldiers were captured in a raid in Sumifru compound in New Corella, Davao del Norte on Decmeb. MindaNews photo by TOTO LOZANO 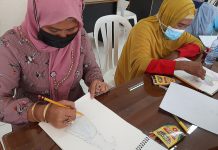