Home Photo of the Day One Percent Drieza Liningding, secretary general of Marawi-based Bangsamoro National Movement for Peace and Development, raises a finger to emphasize his argument with an official of the Bangsamoro Transition Council during the public hearing on the draft Bangsamoro Basic Law at the Senate on Tuesday (9 June 2015). Liningding told Senator Ferdinand Marcos Jr. that residents of Lanao del Sur should be given more control in the management of Lake Lanao, main source of Mindanao’s power. MindaNews photo By Froilan Gallardo | Read story 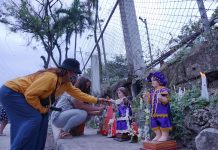 Relief goods for Siargao stuck for two days in Surigao

In Zamboanga City, “No RT-PCR, No Entry” policy reimposed