Protesters beat an effigy draped with an American flag during a rally in Surigao City Thursday (10 Dec 2015) to commemorate the International Human Rights Day. More than 1,000 people participated in the rally that caused a traffic jam downtown. Rallyists urged the government to stop militarization and large-scale mining operations. MindaNews photo by Roel N. Catoto 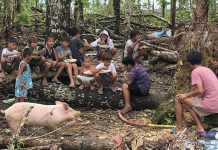