A resident moves towards her house in the business district of Sarimanok in Marawi City on Friday, 30 June 2017, to take out her possessions. It was the first time she returned to her house, located on the upper floor of her store,  since clashes between government forces and the ISIS-inspired Maute Group started on May 23. Authorities are addressing reported complaints of widespread looting in several areas in the city.  MindaNews photo by FROILAN GALLARDO 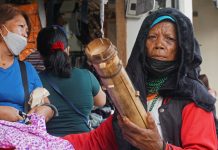