An armored personnel carrier is parked outside the San Pedro Cathedral in Davao City on Sunday, 3 February 2019 as security measures are stepped up in Mindanao after the bombing of the Our Lady of Mount Carmel Cathedral in Jolo, Sulu a week earlier. Parishioners who were unable to enter the church because of the ban on backpacks and large bags, opted to hear mass outside. The cathedral had been bombed twice – on Easter Sunday, April 19, 1981 and December 26, 1993. MindaNews photo by MANMAN DEJETO 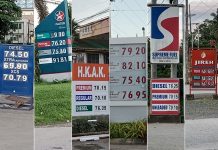