Home Photo of the Day ABS-CBN in CDO ABS-CBN reporters and media workers light candles in front of their regional station in Cagayan de Oro on Saturday, July 18, 2020. A candle-lighting activity and a noise barrage were held in the main headquarters of ABS-CBN in Quezon City and its provincial stations nationwide. On July 10, the House of Representatives denied the franchise renewal of the country’s largest network, a move that has been widely criticized as an assault on press freedom.  MindaNews photos by FROILAN GALLARDO 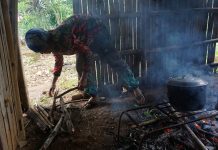