Home Picture Stories The men and women in Pikit gathering

They had suffered the most in times of war, fleeing to evacuation centers where they stayed for weeks, sometimes months. The town plaza in Pikit, North Cotabato had often served as one of those evacuation sites.

But on 27 March 2014, Moro men, women and children gathered at the same plaza for a joyful occasion: to witness on TV the historic signing of the Comprehensive Agreement on the Bangsamoro, which many hope would finally put an end to the decades-old conflict in Mindanao. Read Related Story 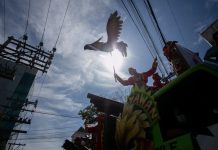