KIDAPAWAN CITY (MindaNews / 04 October) —  Teacher Lovely Jane Bibaoco, a resident of Arakan in North Cotabato  remembers the deployment of soldiers in their barangay gym when martial law was declared in May 2017.

According to her, armed clashes between the military and the New People’s Army (NPA) became prevalent, and residents noticed that military operations followed a schedule.

By Setpember 13, 2019 – or two years after martial law was declared — Arakan, a 1st class municipality in the province of North Cotabato, declared the NPA persona non grata. The declaration came after residents of Sitio Anoling of Barangay Badiangon held a peace assembly stating their intent on not welcoming the NPA in the area.

It was three months before martial law would be lifted.

President Rodrigo Duterte placed Mindanao’s 27 provinces and 33 cities under martial law on May 23, 2017, Day 1 of the five-month Marawi Siege. Duterte declared Marawi “liberated from the terrorist influence” on October 17, 2017.

Duterte terminated the peace negotiations with the National Democratic Front (NDF) which represents the Communist Party of the Philippines (CPP) and the New People’s Army (NPA) ii the talks, through Proclamation 360 on November 23, 2017 just as the government peace panel was on its way to Utrecht supposedly for another round of talks.

On December 5, 2017, he signed Proclamation 374 designating the CPP-NPA as a terrorist group.

North Cotabato is home to various indigenous groups, such as Bagobo, Tagabawa, Obo Manobo and B’laan.

Aside from Arakan, the town of Makilala also declared the CPP-NPA-NDF as “persona non grata” on September 17, 2019.

Makilala, a first-class municipality in the province of North Cotabato, sits near the foot of Mount Apo and nearest to the municipalities of Magpet and Davao del Sur, and is considered a ‘passageway’ of communist rebels to other neighboring municipalities and provinces.

Overall, he said, martial law changed the situation, unlike before when the town was hounded by  armed conflicts, criminality and drugs.

He added that the passage and implementation of EO 70 in the local level was consultative, as the purpose of its passage was explained by the Department of the Interior and Local Government (DILG), which is to ‘address insurgency problem.’

The DILG implemented EO 70 by creating a task force through its ‘whole of nation’ approach – an approach in which all government agencies focus on delivering basic services, from the barangay level to the national line agencies.

Zamora, upon assuming office to head the task force in implementing ELCAC in 2019, was at the helm of implementing a ‘serbisyo caravan,’ which will focus on delivering basic government services, such as health care, dental services and land disputes, but was refocused into relief and rehabilitation, due to the series of above-Magnitude 6 earthquakes between October and December 2019.

Zamora noted that many rebels have surrendered and some expressed their intent to surrender. He hopes that the concerns of those who surrendered would be addressed, despite their limited financial resources.

The Municipal Peace and Order Council of Makilala declared the CNN
“persona non grata” on September 17, 2019.

After its declaration, Zamora said, they monitored only a few sightings of the NPA.

He admits that some rebel elements are still trying to organize and mobilize communities but local government units can address this concern by providing basic services through the Task Force.

Major Arniel Melocotones, Chief of Makilala Police Station, said that under martial law, they continued to do their usual tasks, from manning checkpoints to crime prevention.

He said under martial law,  checkpoints were carried out by the Traffic Management Unit (TMU) and intensive searches were discouraged. Melocotones stressed that search warrants were needed to thoroughly search vehicles passing their checkpoints.

As one of the implementors of EO 70, Melocotones said they planned to launch information and education campaigns on the services of the Philippine National Police to the barangays and to give free police clearances to the far-flung areas once the ‘serbisyo caravan’ of the Makilala LGU will commence.

Joey Bogay, head of the National Commission on Indigenous Peoples in  North Cotabato claims no human rights violations were recorded in the entire province under martial law, and attributes this to the “whole of nation” approach of the NTF-ELCAC.

The Task Force was set up in December 2018 when Duterte asked Congress to extended martial law for the third time,  until December 31, 2019.

Bogay said government agencies are in charge of addressing concerns, and few military interventions are made.

“In fact, if you will analyze, there is a little percentage of military intervention, and they are mostly carried by civilians. For example, land conflict, the Armed Forces of the Philippines cannot resolve it, and agencies involved in addressing this issue are the Department of Environment and Natural Resources, National Commission on Indigenous Peoples and the Department of Agrarian Reform.”

Bogay’s claim that no human rights violations were recorded under martial law is likely because human rights monitoring groups are no longer active in the province. (see sidebar) (John Mark Bautista / for MindaNews) 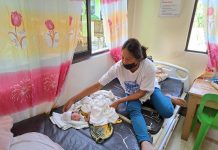