As of  2:30 pm Saturday, Jonathan Pido along with his partner in Team Carmen from Davao del Norte was the first pair reach the boulders area after around nine hours of grueling challenge.

Tourism Officer Camilia Infiesto told MindaNews that the first team is expected to be back at Barangay Sibulan again before Saturday midnight or 2 a.m. Sunday.

Then they will continue to race at 5 a.m. Sunday with water tubing challenge from the Ayala Staff house to the Sibulan bridge, said Infiesto.

“When the racers arrive at the Ayala Staff House by 6 p.m. onwards, they will no longer be allowed to proceed to water tubing. The race will resume the following morning,” she explained.

From the bridge, the racers will run to the finish line at the municipal plaza, which will take about one hour, she added.

Of the 44 teams composed of two racers and a logistics crew each, 11 teams are foreigners from Australia, Hong Kong, Indonesia, Vietnam and other parts of Asia Pacific.

They will be competing with the teams from Metro Manila, Cabanatuan City, Cebu City, Davao City, General Santos City, Digos City, Bukidnon, Davao del Norte and from this province.

The racers left the municipal plaza at 6 a.m. and negotiated the national highway on their bikes all the way to Barangay Sibulan proper. The first pack arrived at the barangay gymnasium at around 7:30 a.m. where the logistics crew was waiting to hand food and water that they would carry on their trek to the peak of Mt. Apo.

Racers can only acquire assistance from the logistics crew at the designated checkpoints at barangay hall of Sibulan (Checkpoint 2) and  at the Ayala Staff house (Checkpoint 15) but they are allowed to refill water from water sources, the rules read.

This means from Sibulan proper, they are on their own all the way to the peak of Mt. Apo and until they are back at the Checkpoint 15, where they will jump off for water tubing.

The racers are also allowed to purchase food and medicine along the way. 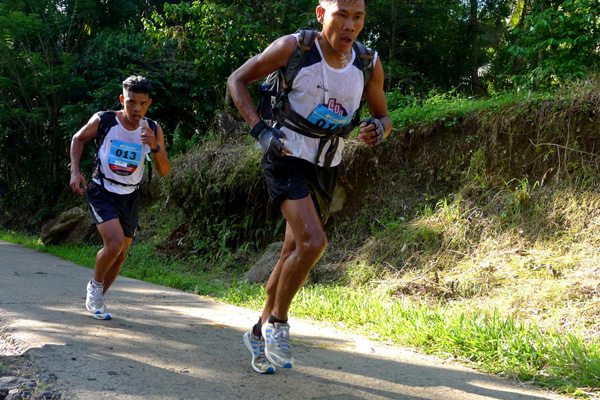 Councilor Oliver Enot, who was at Barangay Sibulan monitoring the event, told Mindanews that it would usually take at least two days to reach the peak even for experienced mountaineers.

Although there are foreign extreme athletes, Enot added that they should not underestimate the capability of local racers because they are really familiar with the terrain.

He said the foreigners did not conduct any dry run on the trail but all of the racers were provided with maps.

The event’s website, www.boulderface.com, says the 24-hour endurance race will cover around 70 to 80 kilometers. The event was organized by the Department of Tourism Xl and local government of Sta.Cruz.

The top five finishers will also receive a consolation prize of P10,000 each (Keith Bacongco/ MindaNews)