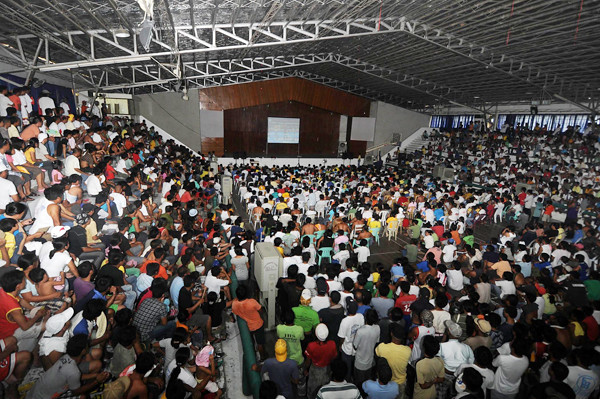 ALABEL, Sarangani (MindaNews/8 May) – While Sunday’s boxing match was trending in Twitter and sports analyses and predictions went viral elsewhere in the Internet, folks in Manny Pacquiao’s hometown didn’t let any chore of the day hinder them from enjoying the sight of the legendary People’s Champ beat up Shane Mosley.

More than the thrill of knowing who wins, we experienced an exercise of our senses: from standing under the scorching heat, while our vehicle’s tire gave up, to loud cheers of the die-hard boxing fans.

We began our adventure by finding our way to the Sarangani Capitol. This seemingly easy task led us to discover an unusual but expected sight in the province: empty roads reminiscent of a ghost town. Unusual, because we rarely see empty roads in the Davao metropolis. Expected, because Pacquiao’s faithful followers stay inside the house or a place where they can see the match broadcasted from Las Vegas live.

While driving our way to the capitol’s gymnasium (to see how the locals watch and celebrate Pacman’s every punch), we listened to an AM radio’s live and graphic commentaries of the undercard matches prior to the main event. The radio anchors pulled off such hilarious quips when describing the events that took place inside the boxing ring. “Nang-hilam-os na og sumbag kining si Boxer1 gikan kay Boxer2.” (Boxer 1 is now washing his face with punches from Boxer 2.)

And they didn’t stop there. We had the pleasure of listening to these commentaries more when we had a flat tire. While waiting for the tire change, we listened some more. “Mamuti gyud siguro ang nawong ni Mosley ani unya basta sumbagon ni Pacquiao. Unsa diay ning mga kumo ni Pacquiao? Astringent?!” (Mosley’s face should turn pale white when he receives Pacquiao’s punches. What are Pacquiao’s fists? Astringent?)

When we finally reached the Sarangani Capitol gymnasium, we saw lots of motorcycles and tricycles parked nearby. This gave us a rough estimate of the people inside: A LOT!

We couldn’t hear yells or cheers just yet; the undercard boxers were still playing. Mosley and Pacquiao haven’t been punching each other’s faces yet. But it’s interesting to note that people started to flock the gym as early as 7 a.m.

The devoted fans, supporters, and boxing enthusiasts came from nearby barangays and towns; some even trekked all the way from Maitum, Glan and Kiamba.

There were kids and a bunch of adults standing outside the closed gymnasium. Some guy in his mid-30s busted out the gym’s entrance and complained just how hot it was inside; that it was cooler to stay and watch the boxing matches from the entrance.

We found out why: the gymnasium that can house over 5,000 people was almost full. The air inside was humid and was difficult to breathe in. We saw a lot of people trying to cool themselves off with paper fans and towels. There were a bunch of air conditioners but we felt like they didn’t work at all (perhaps it was only cool in some spots of the place). Purple curtains covered the windows to prevent the light from coming in, making the place even look and feel warm. Hot. Really hot.

There, the people came together and communed over a large LCD projection of the current match, broadcasted live from half across the globe. It wasn’t very bright, but it was enough to delight Pacquiao’s fans’ visual senses satisfactorily.

There were vendors who walked around selling water and quail eggs. But most stalls which sold milkshake and popcorn were outside the gymnasium.

One vendor claims that business is lucrative during these times; that people dig street food and picapica to watch Pacquiao smother his fists in another boxer’s face.

But the attendance of the vendors were lesser compared to the previous boxing match. This was because most of them were tired because of a recent town fiesta in the plaza.

These are just some of the sights and sound (and smells) on Sunday’s boxing match. These are raw, yet real; and a far cry from a tech geek’s audio-visual experience on a fancy LED monitor in an air-conditioned and scented room. (Jesse Pizarro Boga / MindaNews contributor)