Home Statements Statement by the Ambassador of Canada to the Philippines on the anniversary...

Christopher Thornley, Ambassador of Canada to the Philippines, today issued the following statement regarding the second anniversary of the Maguindinao massacre:

“In commemoration of the second anniversary of the Maguindanao massacre Canada stands with the Filipino people in the call for the rule of law to prevail and for those responsible to be brought to justice.

In remembering the victims, Canada understands that the massacre was not only an act of violence but also an attack on the values shared by Canadian and Filipinos. Human rights, freedom of the press, freedom of expression and the right to free and fair elections are the cornerstones of our societies, and must be respected and protected.

While understanding the process to bring those responsible to justice continues, Canada calls on the Government of the Philippines to ensure the process be completed in a timely and credible manner.

In light of the more recent violence in Western Mindanao, Canada reiterates its hope that a lasting settlement can be found through the ongoing peace process.” #### 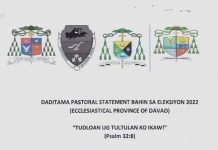