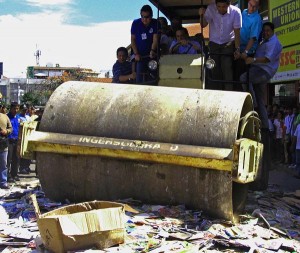 The destruction was made in full public view in front of City Hall and was witnessed by the Optical Media Board (OMB) personnel headed by Executive Director Cyrus Paul Valenzuela and other officials.

Valenzuela said it was so far the OMB’s “biggest haul” surpassing the confiscations in the Visayas and other Mindanao areas.

The pirated DVDs were confiscated in two separate operations conducted by the OMB in coordination with the city government last year, he said.

He said the sale of pirated DVDs is prohibited under Republic Act 9239 otherwise known as the Optical Media Act of 2003.

The pirated DVDs were first crushed by a roadroller and later placed into two shredding machines.

Also destroyed together with the pirated DVDs were 25 slot machines worth P191,000. (MindaNews)