There was no fanfare, no press conference to announce the closure of Lumbia Airport and senior officials from the Civil Aviation Authority of the Philippines (CAAP) were not around to answer queries from the public and journalists.

They were busy at the new P7.8 billion Laguindingan Airport in Laguindingan, Misamis Oriental where commercial flights for passengers to and from Northern Mindanao will resume at 6 a.m. on Saturday, June 15.

“Soon after the last passenger plane leaves at 10 tonight, we will be closing the gates of Lumbia Airport for good, “ CAAP air comptroller Luis Luisma said on Friday.

Trucks laden with desks and office equipment were seen leaving the the CAAP compound in Lumbia Airport en route to Laguindingan Airport.

Luisma said the first commercial plane will arrive in the new airport at 6 a.m.

The Department of Transportation and Communication has limited operations at the new airport at daytime  — from 6 a.m. to 6 p.m. only —  because the airport does not have an Instrument Landing System (ILS).

Luisma said Laguindingan Airport is equipped with a wind cove which can be visible to pilots from miles away, radio communications and the Precision Approach Path Indicator (PAPI) which were installed on both ends of the runway.

“These are the minimum requirements to operate an airport safely,” he said.

He said planes coming to Laguindingan will still use the radar beacon of Lumbia until it is within seven miles — enough visibility to switch to a Visual Flight Rule (VFR) landing.

“The pilots will see the PAPI lights from seven miles away but until they see them, they will rely on the beacon from the Lumbia airport to guide them in,” Luisma said.

Luisma said as soon as the pilots see the PAPI lights, they will start a three-degree inclination toward the runway and land. He said the comptrollers in Laguindingan airport will guide the planes to land at this time.

“The Lumbia tower will still be operational until all the navigational aids will be installed in (Laguindingan Airport) in May 2014. Two towers in Lumbia and Laguindingan will take turns guiding the planes to the new airport and land to land safely,” he said.

While CAAP has apparently solved the safety issues of Laguindingan Airport, the problem of the settlers in Lumbia Airport is another matter.

Former CAAP Northern Mindanao director Artemio Garcia said he and 100 retired ATO and CAAP employees who have made a portion of Lumbia Airport their home will resist any attempt by the Philippine Air Force to demolish their houses.

Garcia and the retired CAAP employees have built their houses on a small strip of land inside the facility since Lumbia Airport expanded operations in 1955. They are joined by 80 families of porters, airline employees and security guards.

“We cannot be thrown away like dogs. We also made sacrifices in turning this airport into what it is today, “ he said.

Garcia said PAF officers have been meeting with them, insisting they vacate their houses or face demolition.

“I told them we are one in planning to resist them. They will face old, retired guys like me who do not want to leave this place we call home,” he said.

As an era of local aviation history came to a close, nostalgia about the old airport swept the social networks.

“That place will always hold a special part in my heart. I had amazing memories and I hope the new one will create the same memories to the young ones,”  Jamisola Rosalia wrote on facebook.

“Oohh I (will) really miss that airport!!” wrote another blogger.

She said it was here where most Cagayanons had their first plane rides and experienced seeing the clouds above the skies.

“Everyone would come in their Sunday’s best when they ride the planes. Polished shoes and pretty dresses,” Roa said.|

Luisma, who has been living in Lumbia since childhood, remembered that the fare to Cebu on board a DC3 plane in the 1960s was P15 while that for Manila was P40.

“I will really miss this place. This is where I grew up, worked and had children,” saidthe 53-year old airport comptroller.

Luisma said Lumbia airport had no major plane accidents except in the 1980s when a Philippine Air Lines BAC one eleven plane skidded off the runway during heavy rain.

“Lumbia airport is lucky for Cagayan de Oro but we have outgrown it. We need a bigger airport for our needs,” Luisma said.

According to local historians, the airport was built by the Americans in the 1930s.  During the second World War, the Japanese improved its runway using manual labor from Cagayanons conscripted for the jobs. A flight of Zeros warplanes  used Lumbia as staging point to attack Filipino guerrillas and ships of US allied forces.

On a runway made of gravel and grass, DC3 planes took off from Patag with destinations to Camiguin and Cebu as well as Manila. Lumbia Airport will be turned into an airbase of the Philippine Air Force 15th Strike Wing. (Froilan Gallardo/MindaNews) 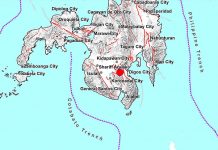