CAGAYAN DE ORO CITY (MindaNews /14 November) — Embattled Mayor Oscar Moreno won a 60-day reprieve after the Court of Appeals on Friday issued a “status quo ante,” a day after the Department of Interior and Local Government (DILG) in Region 10 served Moreno the order from the Ombudsman dismissing him for grave misconduct.

At 5 p.m. on Thursday, Vice Mayor Ian Acenas took his oath as the mayor of Cagayan de Oro. Councilor Candy Darimbang, who topped the electoral race in the 16-member City Council, also took her oath as vice mayor.

The City Council held a special session at 2 p.m. Friday confirming the two were sworn in by the DILG. Moreno got a copy of the CA’s order at 9 p.m. Friday.

“Today ended happily as we received the good news. I am happy that justice still prevailed,” Moreno told his supporters who gathered in front of the city hall since Thursday night. Moreno later told his supporters, many of whom held a vigil Thursday night, to go home and rest.

“Go home now and sleep. We have won a major battle. We have showed that we do not back down to redress a mistake,” said Moreno, who stayed in his office overnight.

The Court of Appeals 22nd division under Justice Henri Jean Paul Inting granted Moreno’s appeal for him to stay in office while he seeks reconsideration of the Ombudsman’ decision.

Inting in issuing the status quo ante restored to Moreno to his post as city mayor of Cagayan de Oro.

Earlier, four justices from the CA three divisions—21st, 22nd, and the 23rd—inhibited from hearing Moreno’s appeal on Thursday.

Moreno said his appeal “just ran out of time,” paving the way for the DILG to implement the dismissal order.

The Office of the Deputy Ombudsman in Mindanao announced in a press conference on November 5 the order to dismiss Moreno and two other mayors in Mindanao. Ombudsman Conchita Carpio Morales approved the dismissal of Moreno along with Glenn Banez, officer-in-charge of the Cagayan de Oro Treasurer’s Office for violation of  Republic Act 7160, also known as the Local Government Code after they allegedly entered into an agreement with Ajinomoto Philippines, a distributor, without prior authorization from the City Council.

The Ombudsman also ordered that Moreno and City Treasurer Glenn Banez be perpetually disqualified from holding public office and forfeiture of all retirement benefits.

Moreno, a former Representative and former Governor of Misamis Oriental, is seeking a secon term as mayor of Cagayan de Oro.

The Ombudsman said Moreno did not file a counter-affidavit to refute the allegations made by complainant, former Taglimao Barangay chairman, William Guialani.

Moreno denied this as he maintained he filed a counter-affidavit at the Office of the Ombudsman in Cagayan de Oro last April.

A check made by local news organizations here revealed that Moreno, indeed, filed his counter-affidavit in Cagayan de Oro but the Davao City office of the Deputy Ombudsman in Mindanao claimed that it received no copy. CHEERS. Supporters of Mayor Oscar Moreno cheer after the Court of Appeals issued a “status quo ante” order a day after the Deparment of Interior and Local Government served the order of the Ombudsman dismissing the embattled chief executive for grave misconduct. MindaNews photo by Froilan Gallardo

“Obviously the Ombudsman’s investigators did not read my counter affidavit when they decided my case. This is a miscarriage of justice,” Moreno said.

Moreno denied he benefited from the Ajinomoto agreement adding that Banez, as a representative of the Department of Finance, had the duty to reclassify Ajinomoto as a taxpayer.

Moreno said the P2.9 million alleged by Guialani was an assessment of how much the city of Cagayan de Oro lost in the years that Ajinomoto was not reclassified as a non-essential taxpayer.

He said the P300,000 was the amount paid by Ajinomoto when it agreed into an out-of-court settlement of the case the company filed against Banez. Ajinomoto has agreed to be reclassified into a “non-essential taxpayer” for next year.

“I have no knowledge or direct hand when Banez reclassified and entered into an agreement with Ajinomoto. He has that duty to reclassify any taxpayer because his office as an agency of the Department of Finance is separate from the office of the mayor, “ Moreno said.

“Besides if a mayor sticks his fingers in every tax collection, it will be prone to abuse and will result to poor fiscal collection,” he added. (Froilan Gallardo / MindaNews) 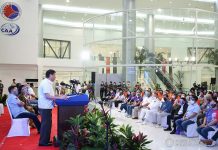