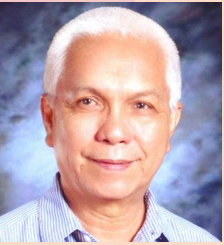 Leoncio B. Evasco, Jr. Photo from the Maribojoc website

The Cabinet Secretary also maintains an efficient records-management system, including a Cabinet Archives and a library; certifies Cabinet resolutions that indicate agreements and actions reached during Cabinet meetings.

Evasco, a priest who joined the underground movement from 1974 to 1983, is completing his third term as mayor of Maribojoc in Bohol.

He served as Duterte’s chief of staff and headed several other departments in the city, including the City Engineer’s Office, until he left for his hometown to run for mayor.

Before Duterte’s announcement, some members of the Davao media held a teleconference Saturday evening with Evasco, who was in Bohol, to clarify reports on heading the Department of Interior and Local Governments (DILG).

“Tan-awon kung unsay istorya ni Digong ani. Unang-una wala man gyud istoryaha, daan man pud ko ingon sa sugod nga dili lage ko mangayo og cabinet position (Let’s just see what Digong would say. First of all, it was not talked about but I already said from the very start that I will not ask for any Cabinet position),” he said

On the criticisms directed at Duterte’s appointees, Evasco added they must respect Duterte’s decision on choosing officials who will run the government.

Atty. Silvestre Bello, who was earlier named by Duterte to be the chair of the peace panel that will negotiate with the Communist Party of the Philippines (CPP), will take the helm of the Department of Labor and Employment (DOLE). Bello had served as Justice Secretary in the Aquino and Ramos administrations.

Duterte on Monday offered the Communist Party of the Philippines “if they decide to join my government” are the departments of Agrarian Reform (DAR), Environment and Natural Resources (DENR), Social Welfare and Development (DSWD) and DOLE.

In a Facebook post, former Local Governmetns Secretary Rafael Alunan III quoted a text message from Teodoro which states: “I have not declined the offer of the President-elect to serve as Defense Secretary. The importance of the position to the National Interest requires no less than serious consultation especially with the President-elect before accepting such in order to ensure that a prospective Secretary is the right choice.”

“Cusi is an organization man. I think he has edge in so many positions in the government. We just met five times in my life but he has the credentials to run the government,” Duterte said.

His Cabinet will still be incomplete by the time he assumes post by June 30 because appointments will be finished towards the end of July or by August, he said.

Here’s the updated list of Duterte’s Cabinet members as of Sunday, May 22: