SULTAN KUDARAT, Maguindanao (MindaNews/15 May) — Voters here say the next elections in this town should have police officers instead of teachers as members of the Board of Election Inspectors (BEIs) as the special elections Saturday in Barangay Katuli started and ended with no untoward incident.

“Voting went on smoothly without delay and without any problem,” Estilleta Orbase, Sultan Kudarat election officer, said after about 700 voters successfully cast their votes.

Special polls were also held in Panglima Estino in Sulu and Binidayan in Lanao del Sur. 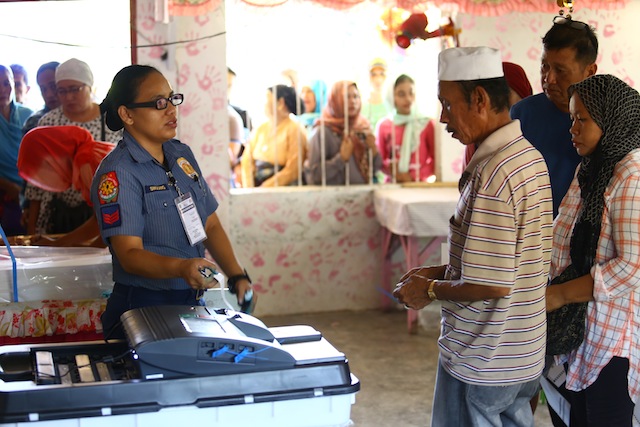 COPS AS BEI. Police personnel handled the special election for more than 700 voters in Katuli, Sultan Kudarat, Maguindanao on Saturday, May 14, 2016. MindaNews photo by FERDINANDH B. CABRERA

During the synchronized elections on May 9, about 20 men, some of them armed, barged inside the clustered precinct in Barangay Katuli, pre-shaded the official ballots and hauled the Vote Counting Machine.

BEIs watched in fear as the men took away the election paraphernalia and voters fled from the Maguindanaon Elementary School.

The VCM has not been recovered.

Orbase said the results have no bearing in local politics but has implications in the tightly contested vice presidential race and in the partylist elections.

Rizalina Esmael, a voter in Barangay Katuli, said what the voters wanted on election day was a peaceful and orderly environment. “At least I have the chance to help my VP bet Bongbong Marcos to catch up on votes. You see, (it is) very orderly and we are safe too,” she said.

“Hopefully, next elections, the BEIs are composed of police officers to ensure safety of all,” she added.

A number of voters chose Anak Mindanao as their party list representative, citing its advocacay to push for the welfare of the Bangsamoro.

He said the military recorded only 15 election related incidents (ERVs) in its area of operation compared to 34 ERVs in 2010 and 38 ERVs in 2013.

Colonel Romeo Brawner Jr, commander of Task Force CHOP (Clean, Honest, Orderly and Peaceful) elections, said the voters have matured and that violence should not interfere in a democratic way of choosing leaders. (Ferdinand B. Cabrera / MindaNews)