MALAYBALAY CITY (MindaNews / 22 May) — The family of slain Umayamnon leader Datu Benjamin “Otto” Omao Sr., representative of the Indigenous Peoples (IPs) in the City Council here has vowed to respond to the accusations of the New People’s Army (NPA) which owned responsibility for killing him allegedly due to criminal acts.

But the family will wait until the 54-year old Lumad (IP) leader is laid to rest on May 26 in his village in Miglamin, Malaybalay City, Bede Blise Omao, his 29-year old daughter told MindaNews in a telephone interview Sunday.

“As of now, our mind is still blank. Personally it is just very painful to hear of all the accusations,” Bede Blise, who served in her father’s legislative staff, added. Omao left behind sx children.

Bede Blise acknowledged having read the statement of the New People’s Army (NPA) issued e-mailed to the media on May 21, or five days after her father was killed in his office in the Indigenous Peoples Apostolate (IPA) in Casisang village. 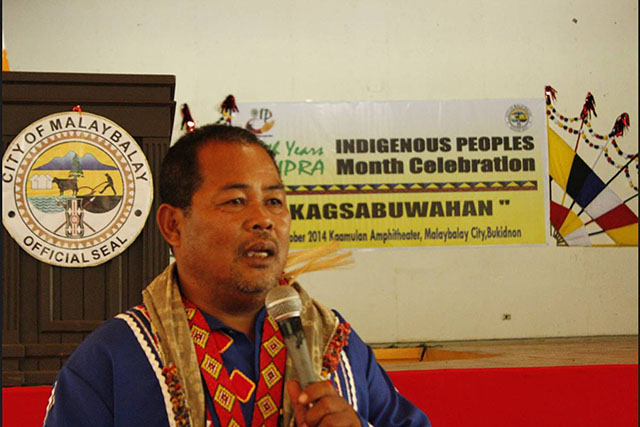 Datu Benjamin “Otto” S. Omao, IP mandatory representative to the Malaybalay City council, speaks during the Indigenous People’s (IP) month celebration in this file photo taken in October 2014. Omao was shot dead in his office in Malaybalay City on May 16, 2016. The New People’s Army claimed responsibility for killing Omao. MindaNews photo by WALTER I. BALANE

Three unidentified gunmen who posed as solicitors shot Omao using long firearms. Three other suspects acted as lookout outside the office and along the highway. They fled on motorcycles, heading south.

The NPA accused Omao of being armed and working with a local bandit group with the support of a military official. They said despite his record, he was chosen as an IP mandatory representative, allegedly by threatening his fellow tribal leaders who selected him to the position.

The NPA said the people have long asked for Omao’s execution. They accused Omao of being responsible for the killing of his nephew in 2004 and a brother in 2005 over land conflict. They also accused Omao of allegedly engaging in trading marijuana from 2005 to 2006.

The rebel group also accused Omao of grabbing about 40 hectares of land and allegedly killing a certain “Nido Omeran” in Brgy. Managok. They also accused Omao of other crimes from alleged cattle rustling to extortion of villagers in relation to the processing of their Certificate of Ancestral Domain Title (CADT).

Omao told reporters earlier that they were processing their CADT application.

The NPA also accused Omao of recruiting members to the Alamara paramilitary group in the villages of Cabanglasan and the city of Malaybalay and allegedly encouraging fellow IPs in killing NPA members. They also accused Omao of rigging a subcontract with road construction contractor Ulticon Builders Inc. and selling sand for his business.

The 10-paragraph statement also included their acknowledgment of two other victims of the incident, Bae Thelma Saieto, another IP mandatory representative from Aglayan and Omao’s aide Sammy Talucdo. They vowed support for the two victims’ financial needs.

On May 17, a day after Omao was killed, the Bukidnon Sangguniang Panlalawigan passed a resolution condemning the “brutal killing” and called on the Philippine National Police to conduct immediate and thorough investigation to bring the perpetrators to justice.

They said Omao’s killing, done in broad daylight, shocked not only the IP community but the whole city.

“The incident is a reminder that criminality in our place is clear and present danger destroying indiscriminately people’s lives which adds another statistic of incidents of deaths in the Province of Bukidnon,” the resolution said.

They said the IP community is in grief for the loss of their representative in the city council, practically depriving them of their voices and aspirations. In another resolution, they expressed their condolences and sympathy to the family.

Bede Blise described her father as a disciplinarian who became a mentor to her, her siblings and others who worked with him. She said that although her father was strict on guiding his children on their chosen careers, he was easy to talk to and was “kidding around” when it was time for it.

“But in work, he was straight. He wants you to stick to your expected tasks,” she added.

Omao, the first ever IP mandatory representative to the Malaybalay City council started as a volunteer for the IPA of the Diocese of Malaybalay under the Jesuit Fr. Vincent Cullen, who pioneered the IP apostolate in Bukidnon.

Bede Blise told MindaNews her father never completed a degree but was never ashamed of it. She said he encouraged his fellow Lumads them to work for the improvement of their lives.

Omao’s father was a barangay chieftain, so he followed his steps and worked as a village councilman. He ran for barangay chair but lost, she added. He continued his volunteer work with IPA as a community organizer until he was selected IP mandatory representative.

“Even before the government mandated the selection of IP representatives in local government, he was already doing that job on his own as a volunteer,” she said.

On May 20, local government personnel, supporters and the police escorted Omao’s hearse as it was transferred from the Villanueva Funeral Homes in the poblacion to his home in Miglamin village in the city’s Basakan district. (Walter I. Balane/MindaNews contributor)