Dubbed “Peace in Our Hearts,” the coloring book is the second COPERS fundraiser for “Hearts for Marawi” and costs 100 pesos each. Proceeds will go to the printing of yet another batch of the same coloring books that will be used in the psychosocial processing aimed at “encouraging harmony in diversity.”

Ilagan explained that the coloring book is a “guide to start off conversations on intercultural interactions and personal aspirations” and is an attempt at “standardizing the processing” of the children displaced by the war between government forces and the Maute Group since May 23.

As part of its emergency response to the Marawi Crisis, the ADDU COPERS launched its “Hearts for Marawi” fundraiser in July 2017.

Donors were given cardboard hearts where they could write their message of support to the beneficiaries among the displaced children who were staying in home-based and non-formal evacuation centers.

Spearheaded by AB Psychology senior Rey Jan Pusta, the project was instrumental in putting together over 2,000 schoolkits that were used by COPERS and its local partners in conducting therapeutic art sessions in Iligan City and affected municipalities in Lanao del Sur.

Some 20,000 displaced schoolchildren from Marawi were accepted to attend school in places where they are temporarily staying but according to a press release from COPERS, the integration of the “bakwit” children in schools in the host communities has not been easy for many of them. “Host public schools in particular already lacked facilities to cater to their homegrown student body, and the additional registrants contributed to heavy workload of teachers, crowded conditions in the classrooms, and a general scarcity of educational resources,” it noted.

In some schools, COPERS sensed “intercultural tensions simmering below the surface, lending a not-so-welcoming environment for the displaced children.”

In response, COPERS engaged schools that accepted the IDPs and redirected the training of its local partners to focus on “psychosocial processing at encouraging harmony in diversity.”

Since June 7, 2017 when COPERS rolled out its emergency Mental Health and Psychosocial Support (MHPSS) services for Marawi IDPs, it had generated psychosocial processing resources that are “age-appropriate, culturally sensitive, and peace-centered” and kept its local partners supplied with these to help ease their burden of service delivery.

The “Peace in Our Hearts” coloring book was developed in collaboration with Meranaw youth volunteers and the Caritas Humanitarian Aid & Relief Initiatives, Singapore (CHARIS). Iligan-based artist Peterson Miranda executed the drawings from a storyline crafted by Mouhammad Camal Sharief. The resource was designed to instill the values of multiculturalism, pakikipagkapwa, connectedness, and optimism. 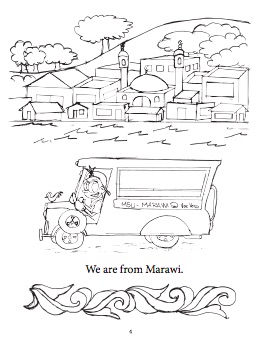 “It is our hope that every school-aged child displaced from Marawi could be reached for psychosocial processing initiated by his engagement of the coloring book’s storyline,” COPERS said.

The 18-page coloring book has Mahdi, a Meranaw child, talking about his Marawi City, his religion, the madrasah, his neighborhood, his friendship with his classmate Angelo, his dream of becoming the best doctor in Marawi, and ends with the question “How about you? What do you dream of becoming?”

COPERS is inviting the community “to take part in this endeavor to realize the University’s Mission to engage in vibrant community service by sponsoring the printing of this resource intended to facilitate the healthy adjustment of displaced children in their host schools.”

Ilagan said organizations that want to sponsor can make arrangements with COPERS at D204/206 at the ADDU Jacinto campus, on how to indicate the donation is from them. For further details, please call 2212411 loc 8273 or 8351. (MindaNews)