Reports from the Cotabato Police Provincial Office (CPPO) said cops raided the hideout of the Kaludins and two more houses in Barangay Kayaga whose owners were also believed to be involved in several criminal activities, including carnapping, robbery/hold-ups, and gun-for-hire.

Supt. Bernard Tayong, CPPO spokesman, said their operatives started the search at the house of the Kaludins but the brothers caught sight of them and fired the first shots.

Two others – Randy Abdul Kaludin and Kamad Muhammad Maambig – eluded arrest during the raid, according to Tayong.

Kaludin and Maambig were also included in the search warrants the local court in Kabacan issued on Dec. 1.

Yet another suspect, Boy Talipasan Usman, was not in his house when the raid was conducted and is now subject of police manhunt, Tayong added.

Three unlicensed firearms – a caliber .38 revolver, caliber .45 pistol, and a shotgun – and a fragmentation grenade were reportedly confiscated from the slain brothers.

Tayong said they are readying charges of carnapping against Usman while possession of unlicensed guns and grenade would be filed against Randy Abdul Kaludin and Maambig. (Malu Cadelina Manar / MindaNews) 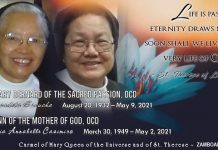