DAVAO CITY (MindaNews / 14 March) — More than half of the 657 persons listed by the Department of Justice (DOJ) as alleged members of the Communist Party of the Philippines (CPP) and its armed wing, the New People’s Army (NPA), are from Mindanao.

The DOJ list is contained in a 55-page petition that seeks to have the CPP and NPA declared as “terrorist and outlawed organizations, associations and/or group of persons” pursuant to the Human Security Act of 2007.

President Rodrigo Duterte called off the peace talks with the National Democratic Front (NDF) which is representing the CPP/NPA, through Proclamation 360 issued on November 23 last year, two days before the talks were to resume in Norway to deliberate on the common drafts of the Comprehensive Agreement on Socio-Economic Reforms (CASER).

On December 5, Duterte issued Proclamation 374 declaring the CPP-NPA as a
“designated/identified terrorist organization” under RA 10168 or “The Terrorism Financing Prevention and Suppression Act of 2012.” 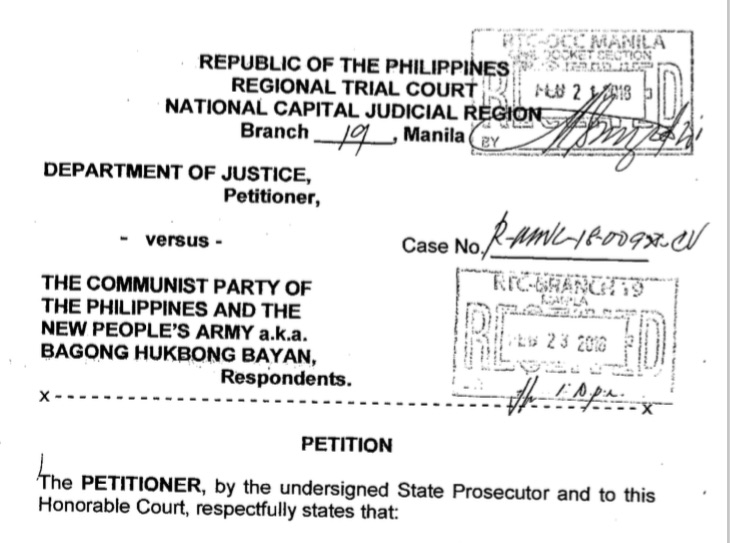 In its petition for proscription filed before the Regional Trial Court Branch 19 in Manila on February 21, the DOJ listed 657 persons from various parts of the country who it alleged are members of the CPP-NPA.

MindaNews counted 364 from Mindanao or 55.40% of the nationwide total.

The ‘terrorist’ list accounts for 21 pages of the 55-page DOJ petition, 10 pages of that the names of those based in Mindanao.

Mindanao continues to host the biggest concentration of the NPA in the country.

“Eastern Mindanao is the area where majority of the NPAs are situated,” Lt. Col. Emmanuel Garcia, chief of the Public Affairs Office of the Armed Forces of the Philippines said.

“To give you a better view,” he told MindaNews in a text message Monday, “about 60% of the NPA guerilla fronts and red fighters are in Mindanao. Then 80% of those are in Eastern Mindanao.”

Garcia said the nationwide strength of the NPA as of last year was “3,700 based on revelations of captured/arrested/surrendered NPAs themselves.”

“The process is not an exact science. There might be a margin of error of probably plus/minus 200,” he said.

The armed strength of the NPA in the North Central Mindanao Regional Committee (NCMRC) which covers portions of Agusan del Sur, Bukidnon and Misamis Oriental is “maliit” (small), Garcia said, adding “pinakamalaki ang nasa eastern than north. Pinakamalaki ang SMRC then NEMRC” (The biggest number is in the eastern rather than northern part. SMRC has the most number followed by NEMRC).

According to the DOJ list, the NCMRC, which Garcia described as “maliit,”  has the most number of alleged members not only Mindanao-wide but nationwide — 276 — which accounts for 75.82% of Mindanao’s 364 and 40% of the total 657.

Combined, the DOJ list of 72 alleged members from SMRC and NEMC/NEMRC constitute only 19.78% of 364.

“Only DOJ can probably comment on that,” Garcia said when asked about the DOJ-listed higher figures for NCMRC compared with SMRC and NEMRC.

Garcia said he has not seen the DOJ list. “It is now in court, let us wait for the arguments of concerned parties and the ruling of the court,” he said.

The DOJ list of alleged CPP/NPA members from Mindanao include Jorge Madlos of the “National Operations Command, National Military Commission.”

Madlos, alias Ka Oris, was a former NDF-Mindanao spokesperson before he was named NPA spokesperson.

Karapatan Secretary General Cristina Palabay said in a press release on March 9 that the DOJ list is “a take-off from the Order of Battle (OB) lists of the Gloria Arroyo and Noynoy Aquino regimes” and “an effort to sow fear and panic among Duterte’s detractors, subjectively prepare the public for more intense political repression, and be the front act of a crackdown against the dictator wannabe’s critics.”

But Palabay also noted that the DOJ list included “those who are dead, missing and members of paramilitary units accused of killing Lumads in Mindanao.”

“The list also contains seven names of paramilitary group members including four from the New Indigenous Peoples’ Army (NIPAR), led by Alde ‘Butchoy’ Salusad, who have standing warrants for the killing of Lumad leader Datu Jimmy Liguyon. They also have been presented and paid as surrenderees, consistent to their being all-purpose pawns in the military’s repressive schemes,” she said.

The DOJ’s nationwide list also includes Victoria Tauli-Corpuz, UN Special Rapporteur on the rights of Indigenous Peoples, who said in a March 8 statement that the inclusion of her name is “baseless, malicious, and irresponsible.”

Presidential Spokesperson Harry Roque on Saturday said Corpuz landed on the list “because of intelligence information that she is somehow connected with the CPP-NPA.”

He said the DOJ “would not have filed the petition without evidence that she is a member of or somehow affiliated with the CPP-NPA.”

“She is not automatically tagged as a terrorist. She can dispute the classification in the regional trial court where the petition to declare the CPP-NPA as terrorist group is currently pending,” Roque said. (Carolyn O. Arguillas / MindaNews)