DAVAO CITY (MindaNews / 08 October) — Sixty-eight local government units in Mindanao constituted a fourth of the 263 recipients nationwide of this year’s Seal of Good Local Governance (SGLG), with the country’s poorest region — the soon to be abolished Autonomous Region in Muslim Mindanao (ARMM) — posting the highest number among Mindanao winners.

Twenty-three local government units (LGUs) in the ARMM — one province (Basilan), one city (Lamitan in Basilan), and 21 towns — met the “all-in” performance indicators of the seven governance areas to qualify for the SGLG: Financial Administration, Disaster Preparedness, Social Protection, Peace and Order, Business Friendliness and Competitiveness, Environmental Management; and Tourism, Culture, and the Arts. The Department of Interior and Local Government (DILG) raised the criteria for the SGLG this year from the “4+1 method” where LGUs must pass four core areas and at least one essential area, to passing all seven indicators.

Local Governments OIC Secretary Eduardo Ano praised the ARMM for “doing wonders,” noting that annually raising the standards of SGLG did not deter LGUs from improving as demonstrated by the ARMM.

ARMM Governor Mujiv Hataman thanked the LGUs in the ARMM for being part of the region’s good governance journey.

The plebiscite for the ratification of the Bangsamoro law is on January 21, 2019.

Awardees are given the 2018 SGLG marker, eligibility to the DILG Performance Challenge Fund (PCF) to finance their local development projects; and access to other programs and capacity development assistance from the DILG.

Of the 17 provincial winners, two are Mindanao LGUs: North Cotabato in Region 12 and Basilan in ARMM.

* in Region 10, four in Lanao del Norte (Kapatagan, Sultan Naga Dimaporo, Kolambugan and Sapad); two in Bukidnon (Maramag and Pangantucan); and one each in Camiguin (Sagay), Misamis Occidental (Bonifacio) and Misamis Oriental (Lugait);

* in Region 12, two in North Cotabato (Magpet and Midsayap); two in South Cotabato (Polomolok and Surallah); and three in Sultan Kudarat (Columbio, Esperanza and Lambayong); and

Assistant Secretary Jonathan E. Malaya, DILG spokesperson, said the Senate’s move to institutionalize the SGLG through Senate Bill No.1843 proves the effectiveness of the program in promoting good governance in the country.

“SGLG is the concrete program of the national government in recognizing and incentivizing good performance of LGUs based on comprehensive standards done through an objective assessment. That’s why it’s a seal, a badge of honor to recipient LGUs,” he said.

The Senate approved last month SB 1843 with 19 affirmative votes, no negative vote and zero abstention, on its third and final reading.

“There is no better way to ensure the continuity of a good program like SGLG but to enshrine it into the law of the land,” Malaya said. (Carolyn O. Arguillas / MindaNews) 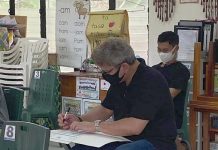