DAVAO CITY (MindaNews / 26 May) – “Before the siege, people went to padian to get the best picks for their daily needs, took to the streets to celebrate or to protest, went to the masjed to praise Allah. Photographs have captured these moments. And it is good to remember,” journalist Bobby Timonera wrote as caption to his invitation to “Marawi Before The Siege” photo exhibit which will open Monday at 9 a.m. at Level 3, Robinsons Place in Iligan City.

Elin Anisha Guro, Chancellor I, Research and Extension and OIC Director of the University Library of the Mindanao State University will cut the ceremonial ribbon and speak at the opening. The exhibit will run until May 31. 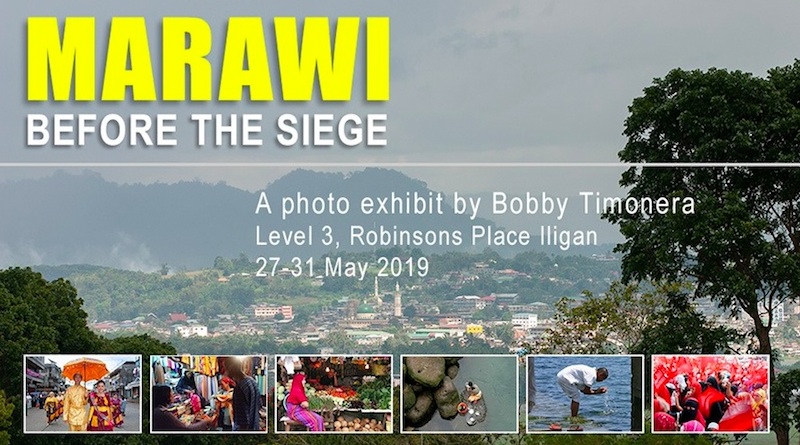 Marawi in the national consciousness has been associated with bad news – kidnappings and rido (clan wars), drugs and election violence – and recently the siege.

But behind those headlines, the country’s lone Islamic City is just like most cities in the Philippines, says Timonera, who co-founded MindaNews in 2001 and is one of its editors.

“The Meranaos, too, eke out a living, they go to church, they go to the streets to protest unjust policies, they spend quality time with their loved ones, they celebrate, their children play and go to school. This is the side of Marawi that I would like to show to the world, a picture of the city and its people that may never be seen again after the five-month long siege in 2017. Enough of the photographs and video clips of the devastation brought about by the war,” he wrote.

Timonera has been covering Marawi since the late 1980s. Iligan, where he lives, is just 36 kilometers away from Marawi, whose old name was Dansalan.

Dansalan was where Timonera’s father, Pedro Jr., was born in 1925 at the Lanao General Hospital, now referred to as the Amai Pakpak Medical Center. The US Army under John Pershing, built the hospital a few steps away from the Kilometer Zero marker.

The hospital was among those attacked by the IS-linked Maute Group on May 23, 2017, Day 1 of the Marawi Siege.

Marawi has a long colorful history and is home to Lake Lanao, the country’s second largest lake. It is also among the coolest areas in Mindanao, situated 700 masl.

Timonera has been a journalist since shortly after graduating from the MSU-Iligan Institute of Technology in 1986.

He covered Iligan City and the rest of the Lanao provinces from the late 1980s up to the early 1990s for various newspapers and wire agencies, doing both writing and photography, the latter a hobby since college days.

He moved to Manila in 1992 and joined the reportorial staff of the Philippine Daily Inquirer, and resumed his Mindanao coverage when the family returned to Iligan five years later.

Among his well known coverages was the firing squad staged by the Moro Islamic Liberation Front in the town center of Masiu, Lanao del Sur, with his pictures and stories landing on the front pages of the Inquirer for a week, and meriting a two-page spread in the defunct AsiaWeek. It brought him to the halls of the Senate for a hearing on the incident, and into hiding for six months for fear of his life.

Timonera lives in Iligan City with his wife, Miriam, a cardiologist, while their two children opted to live elsewhere pursuing their own dreams. (MindaNews)