DAVAO CITY (MindaNews / 09 Feb) – Bukidnon, Mindanao’s top producer of hogs, is stepping up efforts to prevent the entry of the African Swine Fever (ASF), a killer disease affecting pigs, in the wake of recently confirmed outbreaks in Davao Occidental and neighboring Davao City.

DA Regional Director Ricardo Onate on Thursday said he had informed the provincial governments of Bukidnon and Davao del Norte to secure their areas to prevent the entry of the ASF there. 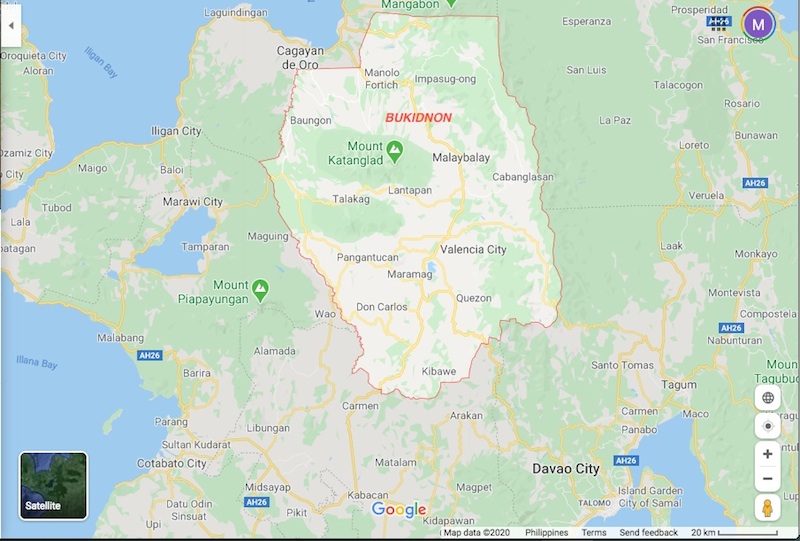 Even without Onate’s alert, however, Bukidnon had long prepared itself against animal diseases.

Located in the heartland of mainland Mindanao, Bukidnon appears to be the most prepared local government unit to address the problem of ASF, as it has been practicing biosecurity measures for decades.

Agriculture Secretary William Dar confirmed on September 9 last year the outbreak of ASF in the provinces of Rizal and Bulacan in Luzon.

The presence of ASF in Mindanao was first reported on January 31, when Mayor Michael Maruya of Don Marcelino in Davao Occidental, issued a directive that “more or less” 1,000 pigs had died in eight of its 15 barangays and Agriculture officials had confirmed this was due to ASF.

For decades now, Bukidnon, has been the lone province in mainland Mindanao with strict biosecurity measures, where quarantine checkpoints have been set up, with wheel baths and where travellers at the boundaries are asked to disembark from their vehicles and step on foot baths, essentially to ensure the landlocked province is spared from hoof and mouth disease or foot and mouth disease.

Three weeks later, however, on October 14, 2019, Zubiri issued EO 26, expanding the scope of EO 22 to include “all other provinces throughout the country” as a “precautionary biosecurity measure for the best interest of the province of Bukidnon.” 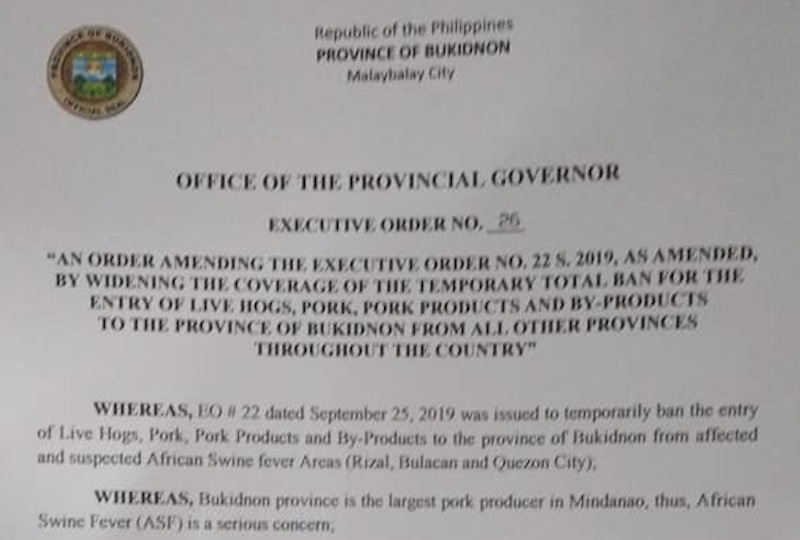 Noting that Bukidnon is “the largest pork producer in Mindanao,” Zubiri said the ASF is “a serious concern” so he expanded the coverage of the ban to include those coming from “other provinces in the country until such time a declaration is made by the Bureau of Animal Industry assuring the safety of the swine industry in the region.”

Bukidnon is also the largest cattle producer in Mindanao.

Zubiri also tasked all mayors in Bukidnon’s two cities and 20 towns to “strengthen the implementation of biosecurity measures, hygiene and sanitation standards and the information and education campaign to its constituents and to report immediately any unusual mortalities to the local agriculture veterinary office.”

The province did not lift the ban.

“EO 26 is temporary total ban of hogs, pork, pork products and by products from all provinces throughout the country so covered na provinces here in Mindanao even before wala pa positive cases (for ASF)” in Mindanao, said Diez, the provincial veterinarian.

Diez said they added personnel as well as checkpoints in the boundaries. She said cities and towns have also established their own checkpoints.

According to the Philippine Statistics Authority’s (PSA) Livestock and Poultry Situation in Northern Mindanao as of July 01, 2019, Bukidnon registered the highest inventory of swine among all the provinces in Northern Mindanao, at 555,230 heads out of the region’s 997,870.

According to the PSA’s Swine Situation Report from October 2019 to December 2019, released on January 30, 2020, Northern Mindanao ranked third highest producer of hogs in the country. Calabarzon was the highest at 103.10 thousand metric tons, liveweight; Central Luzon at 97.22 and Northern Mindanao at 56.61. (Carolyn O. Arguillas / MindaNews)